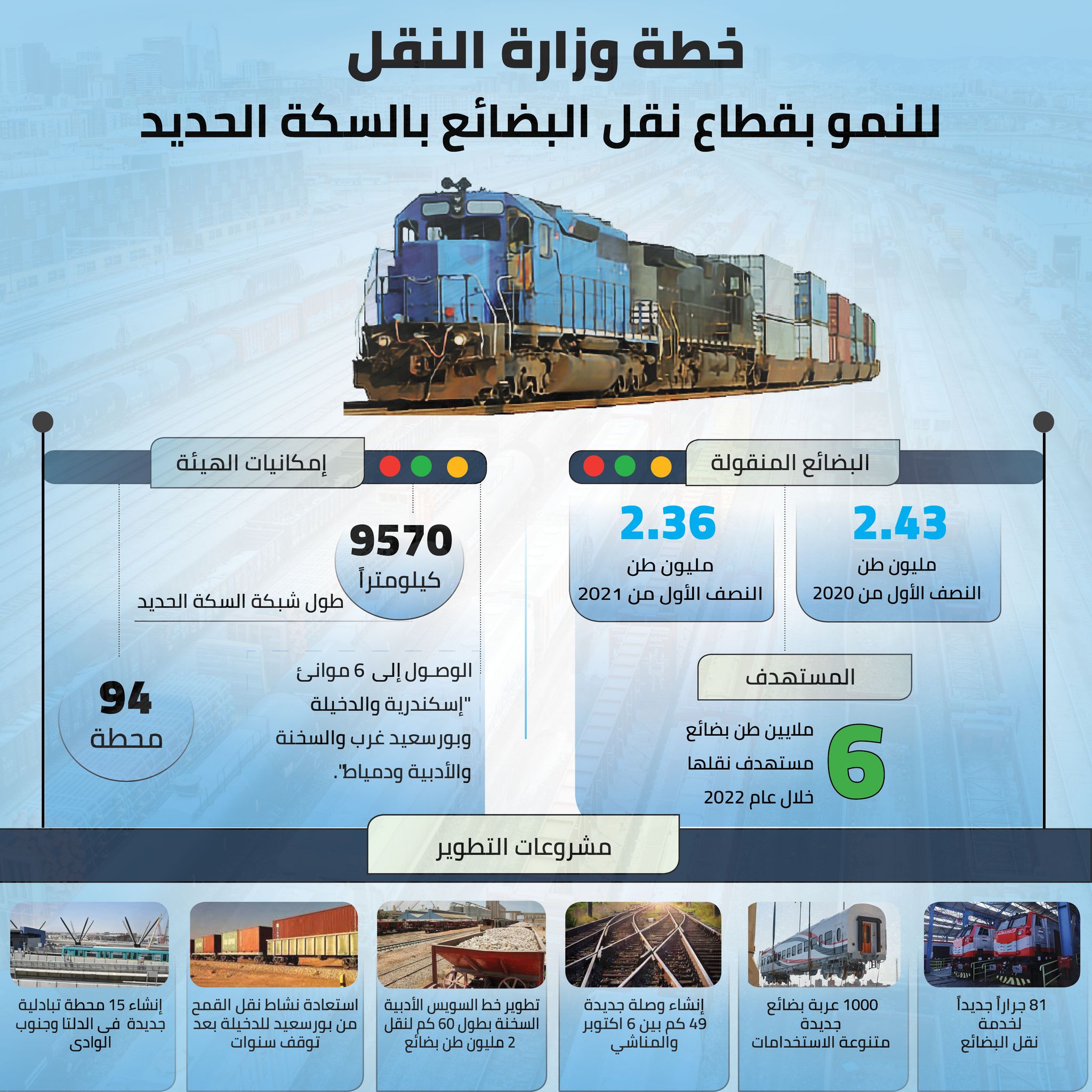 El-Deeb: The growth of freight transport services increases the income of Egypt’s railways by 50%

Hossam El-Deeb, President of Star Shine Shipping and Logistics Company, said that the company aims to acquire 40% of the freight transport market by trains during 2022, by focusing on container transportation and cooperation with major shipping lines such as Maersk and others, and is also studying The company operates international trips with the company’s partners in land transport in the countries of Libya and Sudan, after Egypt went to the arrival of trains to the two countries.

Al-Deeb added, in his interview with Al Borsa, that the company intends to launch a mobile phone application in January 2022 to inquire and book trips by trains, and determine the number of transported containers. Transport; To reach the maximization of rail transport by signing a memorandum of understanding to partner with a number of train operators in Germany and Italy to provide world-class service.

Al-Deeb continued, “Star Shine” began providing a service for transporting containers by trains, in cooperation with Egypt’s railways, about a year ago, by starting with light trips, then turning to regular flights, which were initially for others, and then began working with direct contracts with the agencies and shipping lines that target them. The company has a semi-regular capacity and a number of transported containers, through which it is easy to develop an operating plan for flights and measure rates. The company works with lines such as Hapag-Lloyd.

Al-Deeb stressed that the company faces the biggest obstacle to operating regular flights to transport goods, which is the lack of coordination between the authorities through the mechanism of joint communication with all parties, which is the role provided by the company, and it regulates the launch of the application that the company will launch booking flights during specific periods to ensure the achievement of operational capacity. necessary for a freight train journey; Where the minimum operating time for a cargo train is estimated to be 20 40-foot containers or 40 20-foot containers, and it is expected that the journey time will not be less than trucks at the beginning, but will match the same period during a period of 3 to 6 months since the service operation, and the company is working to update the customer database Those targeted by the service, and some shipping agencies started using the train regularly, such as “Hapag Lloyd”, which the company transports 5 weekly flights with 250 containers, as well as the “One” line, which deals with the company to transport from Alexandria port to Damietta and vice versa as needed.

Al-Deeb stated, “Star Shine” was able to attract customers through the ability to coordinate between the various organizations organizing the work of rail transport, such as the Railways Authority, customs, shipping lines, companies and container stations, whether for export shipments that are transported to container stations through interchange stations such as Ain Sukhna or Area 66 in the sixth of October or Al-Rubiky on the tenth of Ramadan, but the latter stopped for development, as well as the final incoming shipments, and the company, in turn, took over as an agent for the customer or the shipping agency, coordinating through a report with the authorities, whether customs and others, which was accepted by some customers who contacted the company such as El Sewedy and Giza Cables and Unilever to work on a joint cooperation scheme.

The head of the Brilliant Star Company indicated that he had received an invitation from the railways to participate in a meeting with the freight transport sector in the authority; To discuss a vision of how the private sector can participate, and to discuss financial guarantees for the transport of goods, who is entrusted with preparing the stations, the operating company or the authority, and raising the efficiency of train carriages.

He explained, the company contracts with the railways as an operator for the service of transporting containers by trains by operating 5 regular trips from Alexandria port to Damietta per week, and 10-15 trips per month for the Alexandria 6 October route in the 66th area near the industrial area and vice versa. He did not specify the number of Ain Sukhna trips because it depends on The number of customer requests and the volume of dealings, and it is also working to increase trips by making additional investments to achieve growth in activity, and the existing investments with railways are currently estimated at about 2.5 to 5 million per month, and the company aims to increase it to 20 million pounds per month by 2022, after the expansion Within the scope of work, to include industrial areas and stations such as El-Rubiki, Minya and Beni Suef. The company also received a request to transport the requirements of a major energy project in Aswan, and it is expected to be a starting point for regular flights to those destinations.

El-Deeb pointed out the direction of the Alexandria Port Authority towards improving some of the services needed to serve the transport of goods by trains through measures such as working to activate the railway station of the Alexandria Container Handling Company by extending 350 meters of new railways to receive trains and freight, and the railway line will be extended to The Chinese arena in the area known as Safadi Square before 2022, and coordination with customs; Due to the speedy completion of the freight procedures by trains, which have not exceeded two hours at the present time, while there is still no balance and a railway services center in the Bab 2 area, and the value obtained by the Alexandria Container Handling Company on freight by train is reduced by 25%, compared to trucks.

Al-Deeb estimated that the railway transport service reduces the cost compared to trucks by 40%-45%, and is characterized by the arrival of the entire shipment, regardless of the number of containers at the same time. As it happens in Minya stations and Zone 66 in return for giving a competitive advantage to the company and its customers, and contributes to creating a complete network at the level of the Republic for rail transport, pointing out that the cost of transporting a 20-foot container from Alexandria Port to Damietta is 810 pounds as railway fees, in addition to 1000 pounds for fees and statements It is the final value of the container while being transported by trucks at a value of 3300 pounds, and the cost of transporting by trains from Alexandria to 6 October is estimated at 950 pounds, in addition to 1000 pounds for fees and statements, while trucks are 3350 pounds. , Which contributes to increasing the company’s growth and its flights, as its services are distinguished from its competitors by expanding and seeking to work at the level of the Republic. El-Deeb expected that the growth of freight transport services would contribute to an increase in railway income by 50% of the current revenues of the cargo and passenger sectors, in light of the increase in exports from Egypt in the current period to Arab and African countries by 25%.

The company was established in 2019, and works in the field of shipping agencies in shipping, transport, customs clearance, and marine works for agencies and clients. It also participates in the Ministry of Transport’s direction towards increasing the use and transport of trains due to its reduction in congestion, pollution and depreciation rates for highways; due to loads.

The article “Star Shine” aims to acquire 40% of the freight transport market by trains during 2022 was written in Al Borsa newspaper.