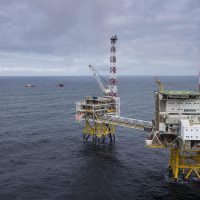 The natural gas crisis hitting the UK and Europe is likely to intensify after China ordered state-backed companies to do their best to secure energy supplies for this winter regardless of cost.

Chinese state media quoted Chinese Premier Li Keqiang recently as saying that the country will secure its energy supply after a series of outages and shortages that forced a large number of companies to restrict production.

This move by China suggests that other parts of the world will have more difficulty securing the fuel they need.

Natural gas prices in the United Kingdom and Europe have recorded a series of record highs in recent weeks due to the possibility of supply shortages this winter, with increasing demand in Asia for the fuel being one of the main factors, the British Financial Times newspaper reported.

Prices for LNG cargoes, the main source of competition between Europe and Asia for gas flows, hit a record high on Thursday in Asia of $34.47 per million British thermal units, as buyers scrambled to secure shipments, with China grappling with widespread generation problems. Energy due to coal shortage.

In this sense, the surge in LNG prices this year has caused gas prices to rise in the UK and Europe as the continent tries to attract supplies, but buyers in Asia have so far been willing to continue paying a premium to secure shipments, raising the specter of a bidding war between the two regions, and thus The possibility of higher prices.

Commenting on the matter, Laurent Rosicas of IHS Markit, a consultancy, said: “It turns out that gas demand is not very sensitive even to very high prices in both markets.”

The challenges facing the gas market in Europe have been brewing for some time, as a prolonged winter depleted gas stocks and then came the lack of LNG shipments this summer which indicates the difficulty of building stocks to the level the market wants.

Also, lower pipeline supplies from Russia and a sharp drop in domestic production have added to concerns about securing supplies during the frigid winter.

China is facing its own energy crisis due to a shortage of coal needed to generate electricity, which has led to it increasing its purchases of natural gas at a faster rate than traders in Europe had expected.

The resulting rise in gas prices around the world has driven up electricity costs and pushed rising energy costs to the top of the political agenda, amid concerns that the cold winter could squeeze supplies to the point that some energy-intensive industries may You need to restrict production.

Record high gas prices have caused the collapse of 10 UK retail energy suppliers, as well as prompting the government to step in to support a fertilizer company that was one of the country’s main sources of carbon dioxide, which is essential for food packaging, medical treatment and nuclear power plants. also.

China is struggling to boost domestic coal supplies needed to meet rising electricity demand, as its economy recovers from the fallout of the epidemic thanks to strict new safety measures introduced after a series of fatal accidents.

It is noteworthy that coal was traded at 1,700 renminbi, or the equivalent of 263 dollars per ton, last Thursday on the domestic spot market in China, according to the independent provider of price information and advisory services, Argus Media.

Data from the financial services firm Morgan Stanley indicates that energy demand in China has risen by about 15% this year, but domestic coal supplies are up only 5% year-to-date, although coal is still by far the largest source of electricity generation. In China.

In conclusion, Colin Hamilton, an analyst at BMO Capital Markets, said, “Chinese gas purchases are picking up to try to ensure that there is an alternative to coal used for heating.”

The article The strong Chinese demand for energy is exacerbating the gas crisis in Europe was written in Al Borsa newspaper.