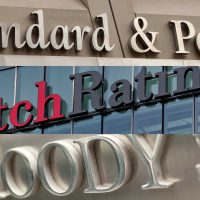 A study showed that credit rating agencies slowly reacted to the “Corona” pandemic, and questioned the extent of the credibility of these agencies and their impact on financial stability.

According to the study, which is about to be published in the International Journal of Financial Analysis and quoted by “Bloomberg”, the three largest rating agencies, “Moody’s”, “Fitch” and “Standard & Poor’s”, conducted a sovereign review only when it was scheduled for regulatory purposes and not as a rapid response to the global spread of the virus. .

The lack of rapid action in the credit rating process is very worrying because sovereign debt represents a large share in investment portfolios and it is clear that it will not be evaluated in a timely manner, said Patrija Klusak, a lecturer in banking and finance at the University of East Anglia and co-author of the paper. .

He added, “We still remember what happened during the global crisis in 2007, when credit rating agencies did not issue recent ratings,” as the “AAA” rating agencies suffered significant losses.

The academics looked at 603 sovereign rating actions by the Big Three over the period from January 2020 to March 2021, and found that they were slower to respond to the pandemic than previous crises.

Study article: Credit rating agencies slowed down in response to the “Corona” crisis, it was written in Al Borsa newspaper.