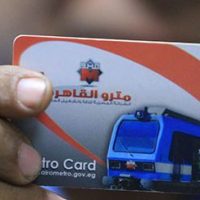 The Egyptian Company for the Management and Operation of the Underground has launched a new service that allows students of all grades to obtain a subscription form electronically by downloading it from the company’s website.

The company explained – in a press release today / Saturday – that the cost of the printed form is collected upon extracting the subscription, and for students who were unable to print the form, they can obtain it through subscription offices or ticket offices in all stations on the first and second lines, which operate throughout operating hours. .
The company added that the approval of this decision came to facilitate and facilitate the students who use metro subscriptions who regularly take metro lines and to preserve them during the fourth wave of the Corona virus, and to implement the company’s vision that aims to save time and effort and to benefit from the state’s trend in supporting digital transformation.
In its statement, the company announced the instructions for extracting subscriptions for students at all educational levels, provided that the data of Form 256 to request participation in a personal photo is completed and approved by the school authority with the seal of the Republic’s logo, also attaching a copy of a valid national ID card or a copy of the birth certificate to the computer, the attached personal photos are approved (two recent photos); So that part of the stamp is on the photo and the other part is on the form and the other photo is approved from the back, and a copy of the current academic year card or receipt of expenses is attached, and the student’s participation is extracted from the place of residence to the study place only.
The company concluded its statement by saying: In order to facilitate for male and female students, a new outlet has been opened to extract subscriptions at the “Manshiyat Al-Sadr and Ezbet Al-Nakhl” stations on the first line, in addition to the current subscription offices on the first and second lines, which operate from eight in the morning until three in the afternoon, and their working hours will extend from Saturday, corresponding to October 9, 2021 from eight in the morning until six in the evening in the subscription offices of the first line stations, which are (Helwan – Ain Helwan – Helwan University – Maadi – Dar al-Salaam – Zahra – Martyrs 1 – Manshiyat al-Sadr – Olive Gardens – Ain Shams – Ezbet al-Nakhl – Old Marg – New Marg) and in the subscription offices of the second line stations, which are (Faculty of Agriculture – Shallats – Saint Teresa – Rod al-Farag – Massarah – Shuhada 2- Ataba – Dokki – Cairo University – Giza – Munib).
For his part, the spokesman for the metro, Ahmed Abdel Hadi, said that there has been a boom in the service provided to the public of passengers since the Minister of Transport, Eng. Kamel Al-Wazir, took charge of the ministry, and that work inside the metro facility is in full swing to provide the best possible services worthy of metro users.
Zanashed Abdel Hadi, the public of passengers, communicated with the Egyptian Company for the Management and Operation of the Underground through the hotline service “16048” and also through the number designated for the WhatsApp service 0122116048 and through the official page of the Cairo Metro on the social networking site Facebook and also through the official website of the company cairometro.gov.eg, In order to receive all complaints, suggestions and inquiries related to the subway.
He pointed out that there are complaints offices in a number of metro stations that are affiliated with the unified government complaints system affiliated to the Council of Ministers, in order to receive all citizens’ complaints related to all parties, not just the metro.

The article, Metro: Launching a service for obtaining subscriptions electronically, to facilitate students, was written in Al Borsa newspaper.