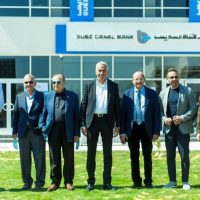 Rifai: an integrated plan to automate and develop a network of Suez Canal Bank branches in line with customer requirements

Hussein Rifai, Chairman and Managing Director of Suez Canal Bank, inaugurated a new branch of the bank at Smash Sports Club, as part of the bank’s strategy to expand, open new branches and develop its existing network of branches to qualify them to keep pace with customer requirements and technological developments.

On the occasion of the opening, Suez Canal Bank made a special offer to install membership in the club and other benefits for clients who are members of the club when opening their accounts.

Mentioned that the bank He renewed several branches as part of an integrated development plan aimed at adding a distinct visual identity that would allow customers to perform their banking services easily and conveniently. The bank developed both the “Al-Orouba” branch and the main center branch in Garden City, next to the “Al-Fustat” branch.

Through the development plan, the bank aims to serve its customers distinctively, as the bank has allocated a place in the branches of “Garden City” and “Al-Orouba” to serve major customers while giving them a unique banking experience, by providing the latest advanced technological services, as well as interactive screens that allow communication with representatives Video and audio service to customers to facilitate obtaining the required banking service, as well as products that support the development of their business plans.

Hussein Rifai, Chairman and Managing Director of Suez Canal Bank, said that the bank adopts an integrated plan to automate and develop the branch network in line with the requirements of customers in the era of smart phones and the Internet.

He added that the number of bank branches reached 48, and we have an ambitious plan to open and renew many branches in the future period.

The article Suez Canal Bank Opens a New Branch in “Smash Sports Club” It was written in the Al-Borsa newspaper.