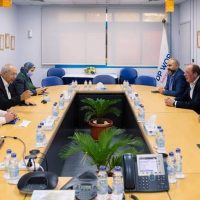 The port witnessed an increase of 25% over the same period of the previous year for the total trading movement inside the port.

This came during his meeting with officials of the Dubai Ports International Company in Sokhna to discuss the latest developments in the business within the port of the economic zone, follow-up procedures for facilitating business and resolving the container overcrowding crisis that the port witnessed recently, as well as standing on the preparations to officially operate the second berth in the coming months.

Engineer Yahya Zaki added that the port administration worked quickly to take the necessary measures to end the crisis of overcrowding of container yards and work on the existence of additional sites to receive containers with this additional quantity, which was the result of the port receiving many international shipping lines from East Asia, which preferred to be in the port of Sokhna as its promising destination. Compared to that overlooking the Red Sea.

Zaki pointed out that these procedures led to a zero indicator of delays or overcrowding inside the yards the day before yesterday, as tomorrow Saturday will witness the inspection of containers first-hand without any overcrowding, which means the port’s commitment to maintaining customers and increasing working cadres with the presence of additional equipment and devices to work as well as Updating the systems used to complete the procedures and speed up the delivery of containers after inspection.

The head of the economic zone of the Suez Canal met with the officials of customs and export and import control and the supporting authorities at the port, explaining that the procedures that take place in Sokhna are reflected in the trading indicators achieved by the port, which will reflect on the local economy in general.

Zaki pointed to the increase in the confidence of international shipping lines in the region’s ports because of the integration they enjoy in the management system within each port, as well as the distinctive location of these ports compared to their counterparts on the Red and Mediterranean Bahrain.

The head of the economic zone also stressed that the region’s ports are integrated together and there is no competition between them because the general return, whether in revenues or trading indicators, is reflected on the national economy and the Egyptian state and gives a message of confidence to investors and shipping lines in Egyptian ports.

The article “The Economy of the Suez Canal”: 25% increase in trading at the Port of Sokhna, the first half of 2021, was written in Al Borsa newspaper.