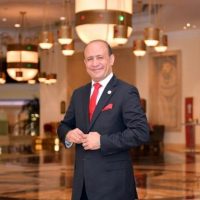 The Indian company Sun Pharma for Pharmaceutical Industries aims to launch 4 new drugs next year, and achieve sales growth between 20-25% by the end of this year.

Hany Meshaal, the company’s general manager in Egypt, said in statements to “Al Borsa” that the company seeks to offer 4 new drugs during 2022 to treat heart diseases and mental illnesses.

He added that “Sun Pharma” launched last year two drugs for the treatment of mental health diseases, indicating that the company is working to implement its expansion plan by introducing new types of drugs.

Sun Pharma owns a factory in the Industrial Zone of 6th of October City on an area of ​​7,000 square meters, which includes a line for the production of capsules and pharmaceutical pills, with a production capacity of 500 million units annually, with investments of up to $15 million.

And “Sun Pharma” is one of the Indian pharmaceutical companies, and it owns 3 factories on the African continent in the countries of Morocco, South Africa and Kenya, and it has been working in the Egyptian market as a trading company manufactured by “Tool” for years before it made a decision to manufacture locally.

In April 2014, Sun Pharma International acquired Ranbaxy Laboratories Limited in a $4 billion deal, which strengthened its presence in the Indian market.

Mishaal added that the drug market witnessed great stability during the current year, and began to recover after the first year of the new Corona pandemic, despite the impact of this pandemic on the prices of raw materials, which have risen recently, especially since companies import the bulk of raw materials from China, which raises the cost production in Egypt.

He demanded that the raw materials needed for production be made available at reasonable prices, in addition to accelerating the registration of new medicines and finalizing the procedures better.

Mishaal pointed out that the establishment of the Egyptian Medicines Authority contributed to the regulation of all operations related to the pharmaceutical market in Egypt, as the authority aims to organize, implement and monitor the quality, effectiveness and safety of medical preparations and supplies stipulated by the provisions of the law establishing the authority, and the raw materials that go into their manufacture.

It also aims to regulate and control the production and circulation of medical preparations and supplies and to verify their quality, effectiveness and safety inside and outside Egypt, within the framework of controlling Egyptian products and the quality of representation abroad.

The article, “Sun Pharma” aims to launch 4 new drugs for heart and psychiatric diseases next year, was written in Al Borsa newspaper.