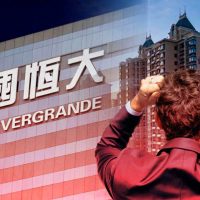 The giant Chinese real estate company, Evergrande, announced on Monday the suspension of trading in its shares on the Hong Kong Stock Exchange, without explaining the reasons for this move.

The share price of the company, which is under huge debt, has plunged about 80% since the beginning of the year, at a time when the company is close to the brink of bankruptcy.

“Trading in the shares of China’s Evergrande Group will be suspended” on the Hong Kong Stock Exchange, the company said in a statement, adding, “Accordingly, trading in all products related to the company will also be suspended at the same time.”

However, trading in the group’s electric car company, which last week canceled a proposal to list it on the Shanghai Stock Exchange, was not suspended, despite its shares tumbling 6% in the first trading.

Last week, the company announced its intention to sell a stake in a regional Chinese bank worth $1.5 billion, as it struggled to pay interest to its bondholders.

There is a fear that the scenario of the American “Lehman Brothers” bank, whose bankruptcy caused the crisis in the United States in 2008, to be repeated in China, the second largest economy in the world.

All eyes are on the Chinese government, which has not indicated whether it intends to intervene on behalf of the special group or not.

Chinese authorities have asked local governments to prepare for a possible collapse of the Evergrande group, according to reports, indicating that a major government rescue plan is unlikely.

The group’s lack of liquidity has led to rare protests of its kind outside its offices in China, as investors and suppliers are demanding their money back.

The group acknowledged that it faces “unprecedented challenges”, warning that it may not be able to meet its obligations.

The article suspending trading in the shares of “Evergrand” company on the Hong Kong Stock Exchange, without clarification, was written in the stock exchange newspaper.