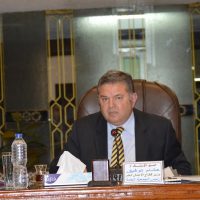 Hisham Tawfiq, Minister of Public Business Sector, said that the results of the experiment of cultivating short-staple cotton, which is being conducted for the second year in isolated desert areas, will be announced at the end of this October, noting that the initial results are promising and good.

He added during the celebration organized by the Egyptian Cotton Association on the International Cotton Day, that it is targeted, after the success of the experiment, to expand the cultivation of short-staple cotton, especially as it represents 98% of the use of cotton in the world and the industries based on it, and that Egypt imports seeds and large quantities of cotton annually.

Tawfik pointed out that this year is a distinguished year for cottons of different lengths worldwide, and their prices have increased significantly, noting that it has been definitively successful in linking Egyptian cottons with international prices.

Tawfiq pointed out that during the current year, the Council of Ministers decided to generalize the system of trade in flower cotton, which is implemented in 18 governorates, and collection centers were opened under the supervision of the Cotton Holding Company with great cooperation between the ministries of the public business sector, agriculture, trade and industry through an executive committee to implement the system.

Tawfiq expected that cotton will be the first commodity to be traded on the electronic commodity exchange, during the next year, and that the centers will be for collection and sorting, noting that the number of centers this year is more than 200 centers at the level of 18 governorates.

Tawfik also expected that Egypt will return strongly to global markets at the level of yarns, fabrics and ready-made products, noting that during the first quarter of 2022 we will reach global markets with a new brand.

For his part, Ahmed Mostafa, head of the Cotton and Textile Holding Company, said that the plan to develop the spinning and weaving sector amounted to $1.2 billion, and the government has completed about 60% of it.

He added that the plan includes the development of the sector, starting from the cultivation process to trading and marketing the final products, pointing out that the focus was on developing gins, as they are the main element in manufacturing.

The article Tawfiq: Announcing the results of the short-staple cotton experiment at the end of this month was written in Al Borsa newspaper.