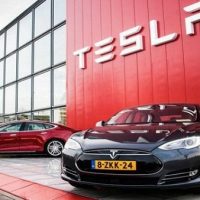 Electric vehicle company Tesla set a record for vehicle delivery exceeding forecasts, with a total of 241,300 vehicles worldwide in the July-September 2021 period, up 73% from the same period last year.

And the American “CNBC” network quoted Tesla that it survived the chip crisis better than its competitors, as total deliveries increased by 20% in the period from July to September 2021 compared to the second quarter, marking the sixth consecutive gain on a quarterly basis. .

Analysts said increased exports to Europe in China and the introduction of a cheaper Model Y helped boost the company’s production, expecting the electric car maker to deliver 299,242 vehicles.

Total production in the third quarter increased more than 15% to 237,823 vehicles compared to the previous quarter.

The article “Tesla” achieved a record in the delivery of electric cars, an increase of 73% over last year, was written in the Al Borsa newspaper.