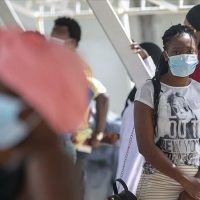 The “African Centers for Disease Control and Prevention” – the health arm of the African Union – confirmed today the registration of the total confirmed infections with the Corona virus at 8 million and 415 thousand cases and 215 thousand deaths, while the total number of Prime Time Zone recovered has reached 7 million and 760 thousand Prime Time Zone since the beginning of the pandemic.
The latest statistics issued by the “African Centers for Disease Control and Prevention” showed that 4.3 percent of the continent’s population was vaccinated with Corona vaccines, while the proportion of those who received a single dose was 6.7 percent of the continent’s population.
She explained that some countries have made very good progress in terms of vaccinating the population, with Morocco immunizing 53% of its population, South Africa 16%, Algeria 9% and Tunisia 26% of its population being fully vaccinated.