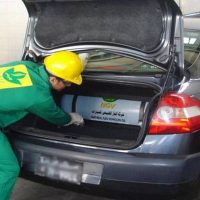 Khalil: A big boom in the production of iron, plastic and tin supplies

Awad: The first batch of new cars will be delivered within the next two months

A number of manufacturers of auto feeding industries considered that the entry into force of the initiative to replace obsolete cars during the current period is a clear vision for the industry within the local market .. which prompted a number of companies producing feeder industries to set development plans and inject more new investments in this sector During the next period.

Ali Tawfiq, head of the Feeding Industries Association, said that the car replacement initiative is expected to revive the auto industry in Egypt, which will be reflected in all the factories producing the feeding industries, which have recently been greatly affected by the negative repercussions resulting from the Corona pandemic.

He explained that all the features included in the initiative motivated a large number of consumers to acquire a car, while the past years had no desire for a large segment of them, due to re-prioritization and dispensing with the purchase of secondary or entertainment goods.

Tawfiq added, that the initiative has given a strong impetus to all companies operating in the sector to return to work at full production capacity again after a clarity of vision in the market. Most of them are preparing to manufacture the needs of the local market, especially products related to converting motors and auto parts from working with gasoline to natural gas.

With regard to the initiative’s contribution to attracting new investments to the sector, he explained that foreign investments exist if there is a strong industry and a large consumer market .. Therefore, it is expected that all companies that supply “nutritious industries” products will come to Egypt to set up their projects .. and thus the import bill of the state will decrease This item.

He pointed out that the movement of components sales in Egypt began to move towards growth, starting from the previous July, which witnessed an increase in sales after a period of stagnation caused by measures to confront “Corona”.

Mohamed Maait, Minister of Finance, said that the initiative will contribute to revitalizing the local auto industry and feeding industries, reducing harmful emissions and improving the civilized image of Egypt. The companies are expected to provide 12 different models of cars, microbuses and taxis.

Eng. Diaa Ali, Chairman of the Board of Directors of the Dhia Company, which is engaged in the production of car springs, said that most of the old car models were scrapped in front of homes. Citizens are currently seeking new cars that will drive the production process in factories on the one hand and create new investment opportunities.

He added to the “Stock Exchange” that the company plans to add a new product as soon as market conditions improve during the coming period, which is manufacturing accessories, mirrors, spaces and composts.

Ali expected the company’s sales to increase by 30% by the end of this year, supported by the entry into force of the initiative, the return of purchasing power and increased demand from wholesalers and spare parts stores since the beginning of 2021.

Khaled Khalil, a member of the Board of Directors of the Automobile Feeding Industries Division, of the Chamber of Engineering Industries of the Federation of Industries, said that some components are likely to boom during the coming period, especially the iron and plastic supplies used in cars as well as the manufacture of tin.

He added that the emphasis on manufacturing those components that do not require local technology will stimulate a large number of small enterprises to enter this activity, as well as move the work of the sector that suffers from stagnation due to the changing consumption patterns of citizens.

A member of the Board of Directors of the Automobile Feeding Industries Division pointed out that the factories producing the car feeding industries provide about 45% of the local market’s needs.

Tariq Awad, spokesman for the initiative to replace old cars to work with natural gas at the Ministry of Finance, confirmed that the aim of the initiative is to revitalize this industry in Egypt in addition to creating a clean environment in line with global development in terms of switching to clean energy.

Awad added that a large number of citizens have the desire to join the initiative, based on the applications that have been submitted so far on the initiative’s website, which have reached nearly 60,000 clients so far, and the number is expected to double during the next month.

He explained that Egypt is implementing a road network at a high level of efficiency.

The poor condition of the roads was a hindrance for a large number of citizens to own a car, and in order for the citizen to own a new car, it needed to provide some advantages granted by the Ministry of Finance for that initiative.

The Ministry of Finance grants the participants an incentive called the “green incentive”, which is a percentage of the price of the new car that they receive.

Awad said that the initiative is currently preparing to deliver the first batch of new cars within the next two months, considering that this speed is due to the government’s keenness to complete the files it is working on in order to contribute to the achievement of the country’s strategy target in 2030.