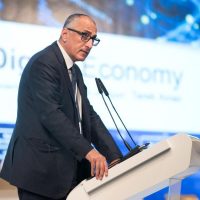 The Central Bank said that imports of intermediate goods rose by $3.3 billion, raw materials by $736.3 million, and investment goods by $529.3 million, and these inputs contribute to improving the growth rate of the Egyptian economy.

The “Central” article: 55.7% of the increase in non-oil imports was caused by intermediate and investment goods written in Al Borsa newspaper.