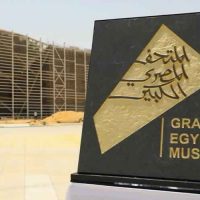 The restorers and archaeologists of the Grand Egyptian Museum, in cooperation with a national company, completed the work of moving and re-installing the second cabin of the young king Tutankhamun inside the window designated for it with the rest of the chapels of the young king.

The General Supervisor of the Grand Museum and the surrounding area, Major General Atef Moftah, said – in a press statement – that the work of installing the cabin took about 4 hours of meticulous work, which gives an honorable picture of the Egyptian restorer and his ingenuity in dealing with antiquities of a special nature.

The Assistant Minister of Tourism and Antiquities for Archaeological Affairs at the Grand Egyptian Museum, Dr. Al-Tayeb Abbas, said that this cabin is made of gilded wood, and it was found among the king’s possessions in his tomb on the western bank of Luxor, which was discovered in November 1922, and then it was transferred with the rest of the pieces to the Egyptian Museum. Editing where it was displayed.

He added that the remaining first cabin will be moved soon to display each of the palaces of King Tutankhamun in a special window, according to the latest museum display methods in the halls dedicated to displaying the treasures of the king, which have an area of ​​about 7200 square meters, and which are equipped with the latest museum display methods from two environmentally controlled vats. In terms of temperature, humidity and lighting, in addition to graphic means and explanation cards for each piece, as well as display screens showing the display scenario of the young king, stressing that the work of placing other artifacts of King Tutankhamun is going on regularly and according to its schedule.

For his part, the head of the Museums Sector, Moamen Othman, confirmed that the process of transferring the cabin was carried out in accordance with the principles and precise scientific standards, as the cabin was dismantled into 15 parts in the same style and method of industry used by the ancient Egyptian, and then each part was individually wrapped inside an internal box and an external one using free materials. From acidity, noting that the work team from the Grand Egyptian Museum and the Egyptian Museum in Tahrir continues to work day and night to finish the restoration work of the first cabin, in preparation for its transfer and display inside the window designated for it inside the treasures halls of the young king.

Dr. Issa Zidan, Director General of Executive Affairs for the Restoration and Transfer of Antiquities at the Grand Egyptian Museum, confirmed that the work team carried out the restoration, strengthening, protection and strengthening work of the cabin before the transfer process, and this was preceded by the work of examination, scientific and archaeological documentation and photography using X-ray radiography to identify the places of connections and interlocks in the cabin, as well as Weaknesses and strengths to identify the components of the metal in the cabin using X ray fluorescence, in addition to preparing a comprehensive report on the condition of the cabin before the transfer process, which would contribute significantly and well to the process of disassembly, reassembly and assembly.

The article The completion of the transfer of the second cabin of King Tutankhamun and its re-installation in the Grand Egyptian Museum was written in Al Borsa newspaper.