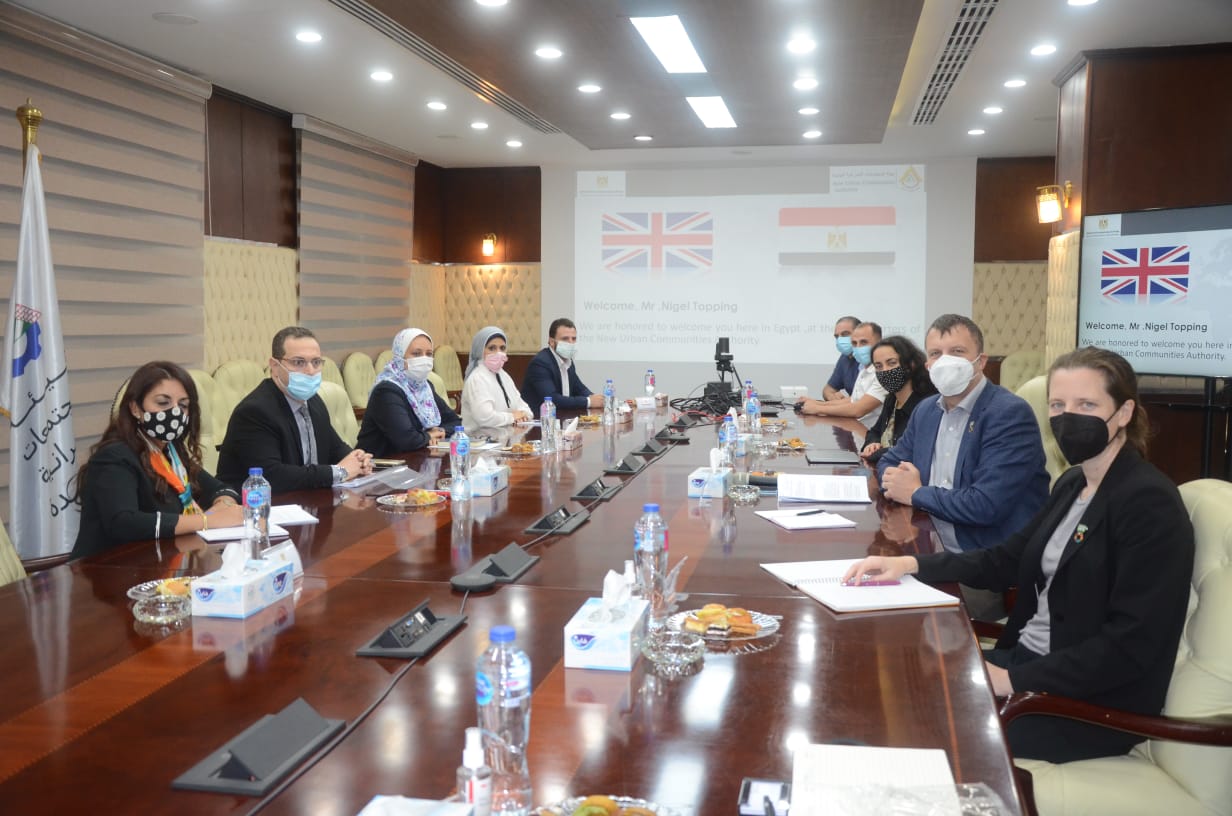 Walid Abbas, Assistant Minister of Housing for Urban Communities Authority Affairs, and supervisor of the planning and projects sector in the authority, received Nigel Topping, the high-level British climate action champion, and his accompanying delegation, to discuss mechanisms for cooperation in climate change issues, ahead of the twenty-sixth climate conference scheduled to be held in the Kingdom United States, next November.

Dr. Walid Abbas indicated that during the meeting, they reviewed ways of coordination and mechanisms for maintaining the quality of the climate in new cities, and the national projects implemented by the authority or supervising their implementation, especially after the authority won the United Nations Human Settlements Award 2021 in the field of sustainable urban development. Preparations for hosting the United Nations Climate Change Conference in Britain, as well as Egypt’s hosting of the next session of the same conference next year, on behalf of the African continent, which comes from the political leadership’s belief in the importance of climate change issues.

The Assistant Minister of Housing presented the Authority’s achievements since its inception, beginning with the first generation of new cities, and reaching the fourth generation of the cities under construction, stressing that the volume of investments in these cities and the planning methods followed work to achieve sustainable development in them.

He said that the Urban Communities Authority adopts a strategy based on green architecture and implements projects aimed at achieving optimal use of energy sources, such as the establishment of solar power plants on top of the buildings of new city devices, as well as the use of solar heaters in some residential buildings, as well as lighting some streets with solar energy and generalizing road lighting. With energy-saving headlights, and allocating special bike paths with a distance of about 26 km as a first stage in a number of new cities, which will contribute to reducing harmful emissions and achieving a clean environment.

The British envoy praises the scale of urban development that Egypt is witnessing in all sectors, especially the housing sector

For his part, Nigel Topping praised the scale of urban development that Egypt is witnessing in all sectors, especially the housing sector, stressing his great fascination with the Egyptians’ keenness to link the ancient past with the bright present and promising future, saying: “I was not expected to see such achievements in such a period of time. short period of time.”

Topping explained that, in line with international efforts aimed at limiting the rise in temperature and reducing greenhouse gas emissions as soon as possible and until the middle of this century at the latest, a race to zero carbon dioxide emissions was organized, expressing a desire to include Some of the existing Egyptian cities and the new ones, especially the new city of El Alamein, as it is one of the most prominent Egyptian cities eligible to join that race.

The article, the Deputy Minister of Housing discussing mechanisms of cooperation with the “Champion of Climate Action in the United Kingdom”, was written in Al Borsa newspaper.