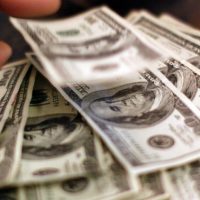 The US dollar was stuck below a one-month high it touched overnight as global markets settled on Tuesday, while investors, bracing for a potential stumble of property developer China Evergrande, looked for safety in the yen and Swiss franc.

Against a basket of other major currencies, the dollar index fell to 93.12 after reaching its highest level since August 23 at 93.45 in the previous session.

The Norwegian krone benefited from the recovery of the markets, along with the rise in commodity prices, as it rose by about one percent, which erased most of the losses it had incurred during the night.

The Australian and New Zealand dollars rose 0.1% each.

Before the Evergrande debt crisis hit the markets, the dollar received support ahead of this week’s Federal Reserve meeting, with economists polled by Reuters expecting policymakers to point to expectations of delaying the phased stimulus plan to November.

Cryptocurrencies continued to suffer amid risk aversion, as Bitcoin largely settled near $43,000 on Tuesday, after earlier touching $4,0192.90 for the first time since August 6.

The article “the dollar” fell from the top of a month .. and the rise of the “yen” and “franc” currencies was written in Al Borsa newspaper.