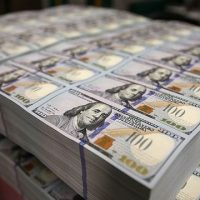 Caution dominated the currency markets on Tuesday ahead of the start of the two-day monetary policy committee meeting of the US Federal Reserve (the central bank).

It is expected that policymakers in the Council expect that the US economy will grow in 2021 at the fastest pace in decades with the decline in the unemployment rate and the high rate of inflation, but a change in monetary policy is unlikely.

The dollar stabilized overnight and then rose at the start of trading in Europe, increasing 0.1 percent to 91.946.

The rise of the dollar comes as US Treasury yields have increased, but remain below the unprecedented levels reached recently.

The Australian dollar fell 0.4 percent to 0.77225 against the dollar, which rose, while the New Zealand dollar lost about 0.3 percent.

The Japanese currency fell against the US dollar, recording 109.225 yen. On Friday, the Bank of Japan’s two-day policy meeting ends. On Tuesday, the bank’s governor said it was important that interest rates remain “stable at a low level”.

The article, the dollar, rises as currency markets anticipate a federal meeting, was written in the Stock Exchange newspaper.