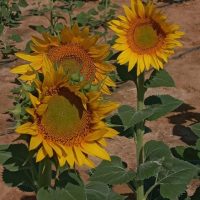 The New Egyptian Rural Development Company, which is responsible for implementing and managing the 1.5 million feddan national project, announced the allocation of an area of ​​420 feddans for the cultivation of the sunflower crop, inside the model farm that the company is currently constructing on an area of ​​2000 feddans.
And its implementation under its administration, within the lands of the 1.5 project in the Moghara region.
This comes due to the strategic importance of the sunflower crop and its multiple benefits. It can also be grown on water with a salinity of up to 3000 parts per million.
Major General Engineer Amr Abdel Wahab, Chairman and Managing Director of the New Egyptian Rural Development Company, stressed the need to revitalize and intensify the cultivation of sunflowers on the company’s lands and the 1.5 million feddan project, which would help bridge the large gap between the size of the cultivated areas. In Egypt, the volume of consumption and the local market needs of edible oil extracted from it.
Major General Amr Abdel Wahab pointed out that Egypt imports so far about 93% of its edible oil needs, a figure that would greatly diminish with the intensification of cultivation of this strategic crop with high economic and profitable returns for farmers in the lands of the 1.5 national project. million acres
Major General Amr Abdel Wahab pointed out that the approach currently adopted by the new Egyptian Rural Development Company also comes within the framework of integration between the plans, approaches and work orientations of the new Egyptian Rural Development Company and the 1.5 million acres project, and between the orientations of the political leadership and the efforts of the Egyptian state to work to encourage Cultivation of oil crops and plants, with the aim of limiting the rise in import rates while targeting the settlement of such complementary crops and industries, with important productive, food and economic returns.

The article “Development of the Egyptian countryside” allocates 420 acres for the cultivation of the sunflower crop was written in Al Borsa newspaper.