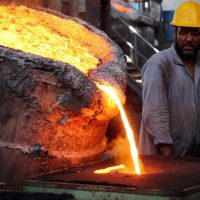 The Ordinary General Assembly of the Iron and Steel Mines and Quarries Company approved the report of the Board of Directors and the financial statements for the first half of this year.

The general assembly approved the proposed profit distribution list for the fiscal year 2020-2021, with the transfer of about 4.63 million pounds to the account of retained earnings.

While the extraordinary general assembly agreed to amend the company’s articles of association to comply with the amendments contained in Law No. 185 of 2020 and the amendments to the executive regulations.

was The Board of Directors of the Iron and Steel Company for Mines and Quarries approved the approval of the revised financial statements with a net profit of EGP 5.54 million after deducting income tax during the first half of the current fiscal year.

During the first six months of the current year ending on June 30, 2021, the company achieved total sales of 41.5 million pounds.

The company explained that the reason for the decrease in the net profit from the previous indicators is due to the amendment of directing some product categories from non-perfect products to finished products, and the amendment of directing the sold raw materials to raw materials exported to the Egyptian Iron and Steel Company (dividing) at cost, calculating provisions other than depreciation, and calculating taxes Income to net profit at 22.5%.

The Board of Directors of the Egyptian Iron and Steel Company had invited the company’s shareholders to attend the Ordinary General Assembly on October 13th; To consider the adoption of the company’s statement of financial position on June 30th.

The general assembly will discuss the liquidation account for the financial period from January 1, 2021 until June 30, 2021, and will also discuss the sale of some assets to the “Iron, Steel, Mines and Quarries” company, which is divided from the parent company to be liquidated.

Earlier, the Holding Company for Metallurgical Industries expected that the procedures for liquidating the Egyptian Iron and Steel Company would be completed within two years, after completing the liquidation procedures and appointing its legal liquidator as of May 30th.

The company added, in a statement, that the liquidation will be noted in the commercial registry for the dividing company within 3 days from the date of publishing the decision in the Egyptian Gazette.

The Financial Supervisory Authority approved the registration of the Iron and Steel Company for Mines and Quarries and the trading of its shares on the Egyptian Stock Exchange.

The company announced, last January, the start of implementing the decisions of its general assembly, to liquidate its steel factory in Helwan, as part of the government’s strategy to reduce the number of losing companies affiliated with the public business sector.

A few days ago, Al Borsa newspaper reported, citing informed sources, that Tarek El Bagoury, head of the mining sector at the Egyptian Iron and Steel Company, had been appointed as managing director and CEO of the Mines and Quarries Company.

The sources indicated that coordination is currently underway with the Ministry of Manpower to agree on compensation scenarios for the company’s employees in its liquidation.

The sources added that the value of compensation for workers will not be less than 200 thousand pounds per worker, and about 400-500 workers in the Iron and Steel Company will be transferred to the new entity.

The general article “Iron and Steel Mines” acknowledges the results of the business and amending its system was written in Al Borsa newspaper.