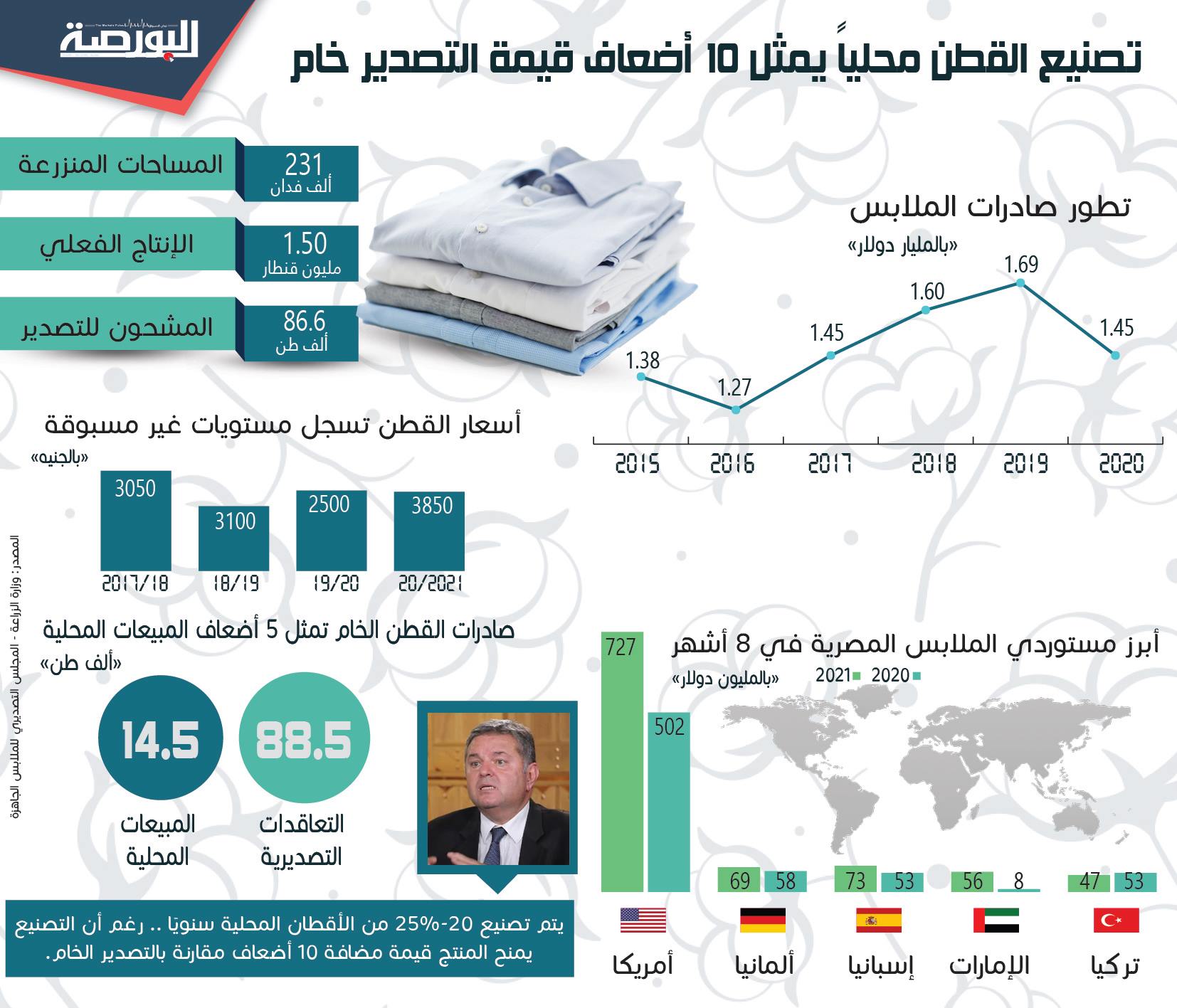 Egypt exports between 88 and 100% of the cotton crop in its raw form without processing, and after the global economic changes that occurred in the last 18 months; Due to the repercussions of “Corona”, several brands are turning to manufacturing in Egypt after the crises that hit the main markets, especially in East Asia.

According to data from the General Authority for Arbitration and Cotton Testing, Egypt exported about 88% of the cotton production in its raw form this season until the end of last August, while local spinners bought the rest. The data indicated that the entire cotton production of last season was exported in its raw form at 1.6 million kantars, which spoils the added value that the industry can gain on the economy.

Why do factories prefer imported cotton?

The local public and private spindles depend on imports to provide raw materials for manufacturing clothes; Because of the lower international prices for the Egyptian crop, despite the quality difference in favor of the latter.

According to sources in the Cotton and Spinning Holding Company, the prices of local cotton are still higher than imported cotton, which raises production costs.. Therefore, imported products are always preferred.

Mohamed El-Qalyoubi, a clothing manufacturer, explained that imported cotton covers the technical specifications required by international markets and the local market, so factories will always prefer the imported product, and Egyptian cotton will continue to export raw materials if the local agricultural market is not rehabilitated.

Farid Wasel, head of the Syndicate of Peasants and Agricultural Producers, said that the high cost of agriculture and the low return are the main reason for the weak economics of the cotton crop, and production costs must be reduced to encourage farmers to cultivate larger areas, which last season amounted to about 231,000 acres.

The Egyptian apparel industry is benefiting weakly from global changes, despite the jump achieved by exports during the first seven months of this year.

Magdy Tolba, former head of the Export Council for Ready-made Garments, Spinning, Weaving and Furniture, said that the benefit is limited, compared to the opportunities available in light of the changes in the outbreak of the Corona virus on the global market.

He continued, “Increasing the production capacities of factories is a duty, in order to take advantage of the increased demand for the Egyptian product recently, in light of the jumps in shipping prices and the closure of some countries producing clothes.”

Tolba expected a big jump in the global demand for Egyptian clothes during 2022 with the return of global market activity and the need to compensate for the losses resulting from the pauses during the outbreak of the Corona epidemic.

Tolba stressed the importance of all parties joining hands to improve the general atmosphere, help companies increase their investments, and raise their production capacities to increase exports.

International cotton prices have risen during the recent period, driven by the decrease in supply, shipping crises at the price level, and delivery on the agreed dates.

The percentage of cotton in a piece of jeans ranges between 10 and 15% of the product.. Therefore, the local use can increase.

Magdy Tolba expected a drop in cotton prices during the month of November with the emergence of the northern hemisphere crop, in addition to expectations that China’s crop would rise from the quantities supplied.

He continued, “Factories are currently trying to coexist with the high cost of raw materials, but they are also suffering from jumps in global freight prices, and an increase in various raw materials prices in light of climate changes and the effects of the outbreak of the Corona virus.”

He pointed out that the currently noticeable impact on the price of cotton appears in local spinners, but it is still limited to imported fabrics in light of the availability of stocks in factories, as companies rely on importing the majority of raw materials from abroad.

He stressed that the cost increases have been going on since the beginning of this year, and it is difficult to generalize an average of this increase to different factories; Because it differs from one factory to another, and is determined by local and imported inputs, and the quality of the machines used, which ultimately affects the cost of production.

Tolba pointed out that there are many burdens borne by the industry during the current period in light of the government’s requirements for taxes, insurances, the minimum wage and its consequences.

Magdy Tolba explained that factories suffer from poor liquidity during the current period, in light of the successive increases in the prices of raw materials, and the government must intervene to protect the industry from the risks it faces. And large foreign buyers are looking for the best price, so work must be done to reduce the cost of production to provide a product that is able to compete with major clothing producing countries such as Bangladesh, China and some African countries.

He also stressed the importance of conducting a thorough study of local manufacturing costs and working to reduce them; So that companies do not face a shortfall in their cash flows that make them unable to compete and exit the market.

Mary Lewis, the current head of the Garment Export Council, said that attracting global manufacturers to Egypt is an important step that must be maximized and benefited from as much as possible, by reducing expenses, reducing waste and manufacturing time, reducing defects in materials, increasing worker production efficiency, and rationing energy consumption to reduce cost. Production and continued competition, which will encourage international brands to enter the Egyptian market.

International fashion companies and clothing manufacturers in Europe and America turned to manufacturing and exporting from Egypt, as an alternative to East Asia and China, with the aim of saving time and money. Because of the crises chasing global supply chains.

A Reuters report said that Egypt and countries in the region may benefit from the crises of global supply chains from China and Asia to attract more clothing manufacturers to it.

The article, The General Authority for Arbitration: 88% of Egyptian cotton exports are “raw” written in Al Borsa newspaper.