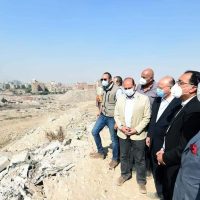 Madbouly: Reviving the first Islamic capital in Africa so that the city of Fustat becomes a museum open to visitors

Dr. Mostafa Madbouly, Prime Minister, said that the Fustat Gardens project is based on the design of a public park that has a view of a number of archaeological and historical sites and monuments.

Madbouly added, during his inspection of the start of the works of the Fustat Gardens project, that the park’s components should be taken advantage of; Whether in terms of spatial or aesthetic components, and from here, work must be done to speed up the completion of the project in preparation for its entry into operation and benefit from it as soon as possible.

Madbouly stressed that this giant project would work to revive the first Islamic capital in Africa, and preserve the timeless Islamic architecture in it. The city of Fustat becomes a museum open to visitors from all over the world.

Assem Al-Jazzar, Minister of Housing, said that the Fustat Gardens project, which is affiliated to the Urban Development Fund and implemented by the Central Agency for Reconstruction, occupies a large area estimated at 500 acres on the road to the Museum of Civilization, and starts from the Amr Ibn Al-Aas Mosque.

Al-Jazzar added that the site has an integrated plan and will contain a market area, small hotels, heritage gardens and a small valley, expressing that this project will transform the area into a great cultural shift.

He said: We are working on implementing the project as soon as possible, according to the directives of the political leadership. After the completion of the project, Fustat Gardens will become the largest of its kind in the Middle East, as it is characterized by a central location in the heart of historic Cairo, to house the Museum of Civilization, Lake Ain Al-Sira, the Religious Complex and Amr Ibn Al-Aas Mosque. Green in the heart of Cairo.

The minister pointed out that the project includes a number of activities that depend on the revival of the Egyptian heritage through various ages, as well as a group of cultural and commercial activities, hotel services and open theaters, in addition to an area of ​​ancient archaeological and excavations, and an area of ​​heritage gardens, as well as a large plateau that allows unique visual communication. With the pyramids of Giza, the Citadel of Salah El-Din and the minarets of Cairo.

The Prime Minister inspected the works that are being implemented in the project to develop the courtyard of the Amr Ibn Al-Aas Mosque, where Major General Mahmoud Nassar, head of the Central Agency for Reconstruction, indicated that the Fustat Gardens project includes in its first phase the development of the courtyard of the Amr Ibn Al-Aas Mosque, where the scope of works includes a new courtyard for the mosque in total. An approximate area of ​​12,000 square meters, pointing out that this square contains 3 fountains, a pump room, a monument, 4 tiered planting walls, in addition to 10 planting basins and 164 palm basins, in addition to establishing two gates to enter the square, as well as an alternative building for services. And work on finishing the walkways and courtyard sessions of marble and granite, and the scope of work includes electromechanical works.

The Prime Minister stressed that the development work that the state is seeking to implement in the Amr Ibn Al-Aas Mosque Square will bring about a qualitative leap in the area, and will increase the number of visitors to this area, taking into account the interest in increasing the green spaces in the project, and linking the services available in this project with other surrounding areas, to be completed as a project A large integrated tourist destination, and was assigned to complete the project as soon as possible.

The article, the government begins implementing the Fustat gardens development project, was written in the Borsa newspaper.