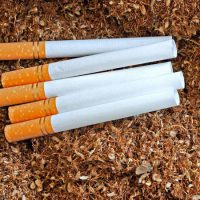 The “Stock Exchange” learned that the legal advisors in the Council of Ministers have started preparing a new conditions brochure For a manufacturing license Cigarettes announced by the Industrial Development Authority recently, and the terms of reference presented by the authority have sparked objections from most of the foreign cigarette manufacturers.

Government sources told Al-Borsa that the file is now under the supervision of the prime minister, after the objections made by foreign companies in the market, which indicated that the conditions establish a monopoly in the sector in which only one company currently works, which is Sharqah Smoke.

The sources added that the applications submitted by companies, especially the monopoly on the manufacture of new electronic cigarettes for both Eastern Tobacco and the project company that won the bid to obtain the right to manufacture the new generation of electronic cigarettes and tobacco heating equipment, will be discussed only.
The sources pointed out that a number of foreign companies operating in the Egyptian market have begun to shift to the electronic cigarette industry, which will expose them to losses if their manufacture is restricted to only two companies for a period of 10 years, as stated in the Industrial Development Authority conditions booklet.

The sources stated that upon completion of the preparation of the new brochure, it will be presented to the Council of Ministers to take an opinion on it before it is presented to investors.

In a related context, Engineer Moataz Mahmoud, head of the Industry Committee in the House of Representatives, said that Egypt seeks to attract more foreign investments in accordance with the development plan targeted by the end of 2030, so the decision to offer a cigarette manufacturing license to local and foreign investors is a good decision by the government.

Moataz added that the committee will discuss the most prominent problems that came in the brochure of conditions recently proposed by the Industrial Development Authority, in the presence of representatives from the authority and a number of industries working in the sector, with the aim of preserving existing investments and ensuring the continued attraction of new investments.

A number of foreign cigarette companies operating in the Egyptian market recently called on the Industrial Development Authority to extend the bidding period for a new license to manufacture cigarettes for an additional period of not less than two months, in a way that would enable them to thoroughly study the process.

The article, the government is preparing a new conditions brochure for the license to manufacture cigarettes, it was written in the Al-Borsa newspaper.