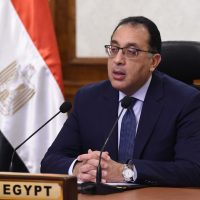 Madbouly: Assignments from the President to quickly implement the project to serve the residents of the residential communities along the path

Dr. Mostafa Madbouly, Prime Minister, said that there are assignments from President Abdel Fattah El-Sisi, President of the Republic, to quickly implement the electric train project, given its strategic importance in serving citizens living in residential communities along the track, and supporting the New Administrative Capital project.

Madbouly added that the project is one of the state’s economic development tools, stressing that the government seeks to implement the project in accordance with the international standards adopted in this regard, and to achieve higher levels of safety for passengers.

Today, the Prime Minister inspected the implementation of the LRT project “Al-Salam – New Administrative Capital – Tenth of Ramadan”, accompanied by Engineer Kamel Al-Wazir, Minister of Transport, Major General Khaled Abdel-Al, Governor of Cairo, and Dr. Essam Wali, Head of the National Authority for Tunnels. The heads of the boards of directors of the executing companies, and a number of leaders of the National Authority for Tunnels.

The tour began from the new Heliopolis station, where the Prime Minister and his entourage boarded the project’s railway test train to Badr station; To inspect the readiness of the railway works at that distance, and also learn about the executive position of the stations, including: Al-Obour, Al-Mustaqbal, Al-Shorouk, and follow up on the work being carried out at Badr Interchange Station, from which two LRT trains will separate: the light electric train heading south to the capital, and the other heading north to Geneva And Ismailia Road, then the tenth of Ramadan.

Eng. Kamel Al-Wazir stressed the importance of the project, as it is a new development artery for the urban communities represented in Obour, Al-Mustaqbal, Al-Shorouk, New Heliopolis, Badr, the Industrial Zone, the Tenth of Ramadan, and the New Administrative Capital, as well as exchanging it for passenger transport services with the third metro line at the station. Adly Mansour, and also exchanges with the fast electric train Ain Sokhna – El Alamein at the central station, as well as exchanges with “Monorail” east of the Nile, which serves the administrative capital at the City of Arts and Culture station.

He said that the project is being implemented in three phases; Where the first phase starts from Adly Mansour station until the capital airport station with a length of 65.63 km with 11 surface stations, to start the second stage after the capital airport station until the city of arts and culture station with a length of 3.18 km, and includes one upper station, which is the arts and culture station, while the third stage begins From the Cathedral Station of the Nativity to the Central Station of the Capital, with a length of 18.5 km, with 4 stations, including 3 upper stations and one surface station.

He added that based on a directive from the political leadership, the project’s route will be extended to serve the large population mass in the Tenth of Ramadan City, the fourth phase, which starts from the Knowledge City station to the 10th of Ramadan City Center station, with a length of 16 km, bringing the total length of the route to 103.3 km with a number of 19 Station.

The Prime Minister, and his entourage, continued to move by train for the railway works tests for the project from Badr station, to reach the LRT light electric train workshops to follow up on their implementation rates, which include 26 buildings, with an area of ​​80 acres, and an implementation rate of 82%, and one of them was inspected. The trains of the LRT light electric rail project, and the plan for the trial operation of the trains, and the plan for the arrival of the rest of the trains.

The minister explained that the total percentage of implementing the works of the mobile units of the project amounted to 74%, adding that it is planned to supply the third and fourth trains and a diesel tractor for the workshop at the end of this month, provided that the rest of the trains will arrive successively so that the last train will be supplied in December 2021, within the fleet of necessary mobile units. To operate, there are 22 trains at a cost of $227 million, which are supplied by the Chinese company KRIK / Avek Intel. The train consists of 6 cars and has a design speed of 120 km / h.

He pointed out that the Chinese “AFIC / KRIK” alliance, the main contractor for the project, was assured of the speedy completion of the supply and installation of all systems, testing and approval of the National Authority for Tunnels, as well as the implementation of all works in parallel; Pointing out that the implementation of construction and finishing works at stations and along the track is almost complete, and rail works are underway along the track and in the workshop.

The minister touched on the executive position of the project’s bridges, which include track bridges, car bridges, as well as fence and workshop works; He explained that the percentage of civil works implementation for the “first and second” phases amounted to 92%, and all 4 car bridges in the project were completed, and they were operated in front of the traffic of cars, namely: Highstep, Future 1, Future 2, and Al-Shorouk, in addition to 7 bridges for the path. The electric train, which is: “Ismailia, Geneva, Al-Rubiky 1 and 2, Suez, Al-Asimah 1, and Al-Asimah 2, with a total implementation rate of 97.5%.

The minister explained that the project also includes 3 tunnels, which have been 100% completed, namely: a car tunnel at the capital’s parks, and two tunnels for the train track: New Heliopolis and Badr. The project’s electromechanical works execution rate reached 50%; Whereas, the Kattari poles that supply the train with electricity are being installed, and cables for electrical power, signals and communications are being laid, and the railway works are being carried out at a rate of 70%.

The Minister of Transport said that the stations will be commercially exploited to increase the economic return of the project, pointing out that there are directives from the political leadership to establish waiting areas next to all LRT stations; To facilitate the citizens.

It is noteworthy that a contract was signed with the French company “RATP DEV” to manage, operate and maintain the LRT electric train during the period of implementation and finishing of the stations; In order to meet any demands of the company during the implementation, as well as for the company to be ready for operation immediately after the completion of the construction work, the company is currently contracting with the staff; in preparation for startup.

The article the government is preparing to operate the electric train “LRT” project was written in Al Borsa newspaper.