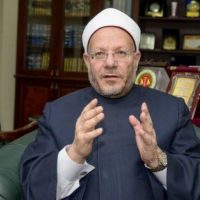 Shawqi Allam, Mufti of the Republic, Head of the General Secretariat of Fatwa Authorities in the world, said that the “Decent Life” project came after severe neglect of the village and the countryside and other areas targeted by the project, noting that the presidential initiative and the great project “A Decent Life” aims to achieve a decent life for our Prime Time Zone. In the Egyptian villages of good deeds; The good work includes worship, purification, and the reconstruction of the earth, and it is happiness for the human being in various aspects of his life, economically, psychologically and socially.

The Grand Mufti of the Republic added, in statements tonight, “We did not find a project that touched the lives of citizens as we found in a project for a decent life. It is a project whose conduct is benign and it is permissible to donate to it; Being a project directed to the poor and to the common benefit and support of the poor villages; And then what applies to the zakat banks will apply to him.”

The Grand Mufti of the Republic pointed out that the Egyptian Dar al-Iftaa is an ancient Islamic institution. It was established more than 125 years ago, specifically in the year 1895 AD, and it is at the forefront of moderate religious institutions that are concerned with developments and calamities, but everything related to the affairs of society and its members at home and abroad. It is an independent institution, and it was established by Egyptian hands and on Egyptian soil, and its work and activity It is not limited to local affairs, but serves Muslims all over the world. Thanks to God, we have found appreciation and international demand from all countries for fruitful and constructive cooperation.

He added that Dar Al-Ifta has never lost its connection with the Egyptian identity throughout its history. In the Egyptian Constitution issued in 1923 AD, and in Chapter Six concerned with general provisions, and with regard to the identity of Egypt, the two most important tributaries of its tributaries are mentioned; They are: religion and language; In it he said: “Islam is the religion of the state, and the Arabic language is its official language.” The scholar who recommended the development of this article was the late scholar Sheikh Muhammad Bakhit al-Mutai’i – the Grand Mufti of Egypt – may God have mercy on him, and he was a member of the committee for preparing this constitution, where the proposal received a quick response from Committee members, and it was approved unanimously without reservation, and since then this text has remained in all Egyptian constitutions.

The Grand Mufti of the Republic explained that the Egyptian Dar al-Ifta is concerned with the issues of the Egyptian and international community, and this is not the result of the moment, but rather it has existed for many years, pointing out that the number of fatwas issued by the Egyptian Dar al-Ifta in the year 2020 AD has approached one million and three hundred thousand fatwas, an increase of two hundred thousand. A fatwa for the previous year, with an average of about 3,500 fatwas per day. These fatwas have varied richly, surrounding everything that concerns a Muslim in the various aspects of his life and the developments that have occurred in society.

The Grand Mufti of the Republic pointed out that the issuance of this large number of different and varied fatwas indicates the extent of Prime Time Zone’s trust in the Egyptian House of Fatwa and its scholars, which confirms the success of the House in reaching the largest possible number of fatwa seekers through several means and mechanisms and through the various departments of the House represented in the oral, telephone and electronic fatwas. Written and written, and the fatwas received by the house through live broadcasts on the social networking site “Facebook”, as well as the application of the house on smart phones.

And the Mufti of the Republic added that the large number of fatwas received by us is not a negative phenomenon, and this does not mean that most Prime Time Zone have whispers, and this cannot often be explained also as resorting to religion at the expense of other supposed solutions, but the responses and fatwas relate to legal aspects, often including a statement The required legal ruling is in addition to taking into account the psychological factor of the respondents. The fatwa is not binding, but rather reassuring. Valmstfti wants to be reassured and wants to take his hand. This is clear and evident in the problems of divorce, of which only very few have actually occurred.

The Mufti of the Republic drew attention to the fact that the Prophet, may God bless him and grant him peace, taught us to respect specialization. Despite his divine knowledge, he consulted the companions of specialists in all worldly affairs; To teach us to turn to specialists.

He pointed out that the fatwa differs from the judiciary and jurisprudence; The fatwa is a specific fact that takes into account the conditions of the questioner, just as speaking about religious sciences without knowledge leads to corruption in belief and religion, as well as daring in all other disciplines such as medicine, pharmacy, engineering, and others may lead to corruption in the souls, and may expose human life to danger. Among the supreme legal purposes is self-preservation, and it is considered the most important of the five intentional necessities on which the honorable Sharia was based. Therefore, specialization must be respected.

He represented the Grand Mufti of the Republic to respect the specialization in the issue of abortion – by way of example but not limited to – saying: The Egyptian Dar al-Iftaa believes that abortion is absolutely forbidden; After the soul has been breathed into the fetus, except for a significant necessity; That the specialized doctor decides that if the fetus remains in its mother’s womb, there is a danger to her life, in which case it is permissible to abort it; Taking into consideration the stable life and health of the mother, and giving her priority over the unstable life of the fetus.

The article, the Mufti of the Republic: The “Decent Life” initiative is one of the good deeds and the door to cooperation in charitable work and charity. It was written in Al Borsa newspaper.