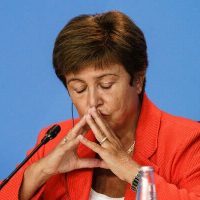 The Executive Board of the International Monetary Fund decided to retain Kristalina Georgieva as Managing Director of the Fund, stressing that she has full confidence to perform her responsibilities.

Georgieva recently faced accusations that she pressured World Bank employees during her time there to manipulate data in favor of China.

This decision was taken after a series of meetings of the Executive Board of the Fund, which has struggled over the past days to reach an agreement on the fate of Georgieva.

France, Germany, Italy and the United Kingdom joined China and Russia in defending the fund manager, while two of the fund’s largest contributors, the United States and Japan, were more resistant and called for a strong review.

The Executive Board of the Fund confirmed in a statement carried by the “Financial Times” newspaper that the evidence presented does not conclusively prove that Georgieva played an illegitimate role in classifying China during the preparation of an important report while she was working for the World Bank.

The article, the IMF supports Georgieva’s continuation as Director General, was written in Al Borsa newspaper.