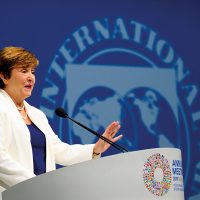 Kristalina Georgieva, President of the International Monetary Fund, praised the performance of the Egyptian government in dealing with the “Covid-19” pandemic, and the positive measures adopted by the government during the pandemic, which contributed to the country achieving a positive growth rate of 3.3% during the fiscal year 2020-2021.

Georgieva explained, at the fall meetings of the International Monetary Fund today (Thursday), that this good performance contributed to strengthening the positive expectations regarding Egyptian economic growth to reach 5.2 in 2022.
She added that the noticeable improvement in expectations regarding GDP growth in Egypt is supported by the successful experience of the Fund with officials in Cairo in terms of implementing the economic reform program and government reforms implemented by the Egyptian government.
She added, “The structural reforms and growth projects adopted by the Egyptian government need significant financing for growth, which contributes to the rise in the volume of public debt, but with the continued improvement and recovery of the economy, these measures and projects will contribute to the formation of a strong Egyptian economy.”
Analysts of the American “Bloomberg” network had confirmed that Egypt’s economy is growing faster than its government debt, and that the debt-to-GDP ratio continues to decline, due to the continued recovery of its economy from the repercussions of the Corona epidemic.
The agency added that the Egyptian government aims to achieve economic growth of more than 5.5 percent by the end of the current fiscal year, after it recorded 3.3 percent during the fiscal year ending last June, despite the continuation of the Corona virus and its serious repercussions that resulted in the closure of many economic activities in all countries of the world, including Egypt and the rich Gulf countries, and the World Bank expected the growth rate of the Egyptian economy to rise in the current fiscal year to 5%.
And Finance Minister Mohamed Maait had confirmed in a previous statement that the government debt-to-GDP ratio would start to decline as of the next fiscal year, as Egypt recorded in the last fiscal year about 91%, a rate lower than the record in some European countries, explaining that we are also targeting Reducing the proportion of debt service allocations in the general budget.
It is noteworthy that last June, the World Bank commended the Egyptian government for adopting more reform steps during 2021 in order to address the repercussions of the pandemic.
At the time, the World Bank expected, in its June World Economic Outlook, that the growth of the Egyptian economy would rise during 2022 and 2023, recording 4.5 and 5.5 percent, respectively.
He explained that Egypt raised the minimum wage for public sector employees (as of July), extended the suspension of fees imposed on most financial transactions for an additional six months starting from the beginning of 2021, and took further measures to boost lending.

The article: The International Monetary Fund: The strong performance of the Egyptian economy in dealing with the pandemic contributed to enhancing its growth rates. It was written in Al Borsa newspaper.