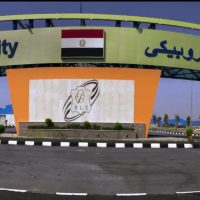 “Mahran”: implementation in partnership with tanneries and “Cairo Investment”

The Italian company “Elsa” is studying the establishment of a factory to produce organic fertilizers from leather tanning residues, in the city of Robiki for leather.

Mohamed Mahran, head of the Leather and Tanneries Division at the Cairo Chamber of Commerce, said that the company is studying the required space, the value of investments, and cooperation mechanisms with the Egyptian government and tanneries.

He added to “Al Borsa”, that the company met with the division during its current visit to Cairo; To discuss mechanisms of cooperation with the private and governmental sectors in Egypt, with the participation of 15 other companies specialized in the tanning and leather industries.

He explained that the Elsa company has a large factory specialized in this field in Italy, and wants to establish a factory in Egypt to exploit the large production capacity of tanneries waste in the city of Al-Rubiki for leather, rather than not benefiting from it.

He continued, “The factory will be in partnership between the Italian company and the tanneries operating in the city of Robiki for leather by exploiting its waste, in addition to the Cairo Company for Investment and Urban and Industrial Development, affiliated to the Ministry of Trade and Industry, which is responsible for managing the city.”

He pointed out that the meeting was attended by 16 Italian companies, Mahmoud Mahrez, Chairman of the Board of Directors of the Cairo Investment Company, and representatives of the Italian Embassy in Cairo; To discuss means of cooperation and exchange of visits between Italian and Egyptian companies.

The area of ​​the first phase is 176 acres, and it has been completely inhabited by the owners of the tanneries of Magra El-Ayoun, and 213 factories have been allocated to 197 investors with areas amounting to 200,000 square meters at a cost of more than 2 billion pounds.

As for the second phase, it includes 54 glue factories with a manufacturing area of ​​23,000 meters on an area of ​​18 acres at a cost of more than 200 million pounds. It will include a factory for the German “Gelita” company, which is the largest producer of food and medical gelatin in the world. Finally, the zone will include 100 factories with investments estimated at 2.9 billion pounds.

Mahran said that the Italian SLF company specialized in issuing quality certificates for export, will cooperate with local tanneries during the next stage.

He added that the company presented cooperation mechanisms and the necessary specifications in products to issue certificates during the meeting, which was attended by representatives of some tanneries this week.

The article, “Elsa”, the Italian studying the establishment of an organic fertilizer factory in “Al-Rubiki”, was written in Al Borsa newspaper.