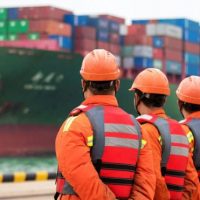 The results of data issued by an industrial association showed a moderate growth in the volume of container productivity in major Chinese ports in late February.

The data issued by the Chinese Ports Association indicated that container productivity in the eight major ports in China during the period from February 21 to 28, increased by 1.6% on an annual basis.

The aforementioned growth rate in the ports of Shenzhen and Guangzhou exceeded 20%, while in the Port of Qingdao it exceeded 15%.

The boom in the productivity of foreign trade containers came amid the rapid expansion of Chinese exports, as the country recorded a 4% growth in exports last year, thanks to its freedom from global economic and trade challenges.

The article The main Chinese ports are witnessing a rise in containers by 1.6% on a year-on-year basis, which was written in the Stock Exchange newspaper.

“Everyone has limits except the king.” New statements by Jordan’s King Abdullah II on the crisis of his brother Prince Hamzah A homeland...