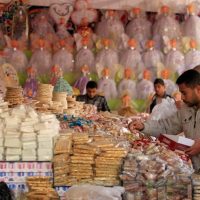 The prices of the Mawlid al-Nabi candy are stable this season, in an attempt by the producing factories to attract consumers despite the high prices of sugar, the main input in the components of all varieties.

Salah Al-Abd, head of the Sweets Division at the Cairo Chamber of Commerce, said that the demand for sweets is still low due to the coincidence of the season with another season, which is the return to schools, expecting a rise in demand at the beginning of next week and the approaching celebration of the Prophet’s birthday.

He added that the prices of Mawlid candy products have stabilized during the current season; Supported by the fact that most of the production requirements are locally made, except for the nuts that are imported.

Al-Abd explained that the prices of the moulid candy in “Al-Abd” branches start from 55 pounds and reach 485 pounds for ready-made boxes, according to the weights and number of pieces, with the prices of one piece ranging between 16 and 48 pounds.

He pointed out that the company has allocated nearly 11 mobile cars in vital neighborhoods to sell the Mawlid al-Nabawi sweets to consumers, in addition to selling it inside the company’s 8 outlets, including 4 showrooms inside the Sixth of October and the rest in Cairo Governorate.

Muhammad explained that selling inside cars is at the cost of the product only, and citizens are not charged with any other expenses in exchange for providing the product due to the current conditions that the country is going through as a result of the spread of the Corona virus.

The company is seeking to achieve a high growth in the sales volume of the current season by up to 20% compared to what it achieved last season.

Concerning the prices of the Mawlid candy at Helou Al-Sham, he said that the company sells sweets per kilogram (your sweetness in scale), and it starts from 55-65 pounds for a box of one kilogram, 125-150 pounds for a 2-kg box, and a 3-kg box with 255 pounds.

If the citizen wishes to choose by piece, the calculation will be done by weight.

Ahmed El-Sakka, owner of Symonds sweets shops, pointed out that sales prices in the current season are stable at rates close to those of last year. With the aim of creating popularity during the peak season, despite the increases in white sugar prices in the local market.

He added that the prices at Symonds range between 135-450 pounds per box, while the price of one piece starts from 15 pounds. The company has a production line dedicated to the birthday of the Prophet candy, with a capacity of 40 tons annually, and it is directed to the local market.

Al-Sakka confirmed that sales for the celebration of the Prophet’s birthday represent approximately 15-20% of the company’s annual sales volume.

Symonds is studying expansion by opening new branches in Madinaty and 6th of October during the last quarter of 2021.

The prices of white sugar witnessed several increases during the last period, to record 9,300 pounds per ton for bulk sugar, and 9,700 pounds for packaged sugar, in the wholesale markets, while retail prices rose to 10 thousand pounds per ton, according to Yehia Kaseb, head of the Foodstuffs Division and the supply exchange at the Giza Chamber of Commerce.

Magdy Tawfik, Deputy Head of the Fragrance Division at the Cairo Chamber of Commerce, said that the prices of nuts have witnessed stability during the current season compared to what they were last year.

He explained that nearly 85% of the nuts are imported from abroad. Hazelnuts, pistachios, cashews, walnuts, almonds, sesame, peanuts, coconut, raisins, and chickpeas are the most important types of nuts needed for the Mawlid al-Nabawi dessert.

The article, “The Prophet’s Birthday” opens the appetite of sweet factories, was written in Al-Borsa newspaper.