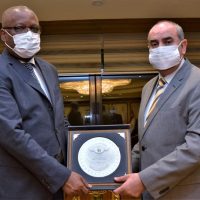 Pilot Mohamed Manar, Minister of Civil Aviation, received at the Ministry’s headquarters Hamad Saidi, Minister of Tourism and Environment of the United Republic of the Comoros, and Atta Effendi, the ambassador of the United Comoros in Cairo, to discuss bilateral relations in the field of civil aviation, and discuss issues of common interest, in the presence of Pilot Montaser Manna, Deputy Minister of Civil Aviation, and Mr. Basem Abdel Karim Assistant Minister of Aviation for International Affairs and Information, Pilot Amr Abu Al-Ainin, Chairman of the Board of Directors of the Holding Company for EgyptAir, and Pilot Amr Nabil, Chairman of the Board of Directors of EgyptAir Airlines.

At the beginning of the meeting, the Minister of Civil Aviation welcomed the delegation of the sisterly United State of the Comoros, stressing the importance of strengthening cooperation with all partners, especially the United Comoros, which is one of the most important trade stations and enjoys attractive potentials. Comoros United, stressing the importance of opening new horizons of cooperation in the field of civil aviation, which contributes to increasing rapprochement between the two countries, in line with the comprehensive development strategy pursued by the Egyptian state.

The Minister of Tourism and Environment also expressed his happiness with this meeting, noting that any cooperation between the Egyptian Ministry of Civil Aviation and the United Comoros State in the various fields and activities of air transport will contribute to achieving economic and development returns for the two countries, expressing his country’s aspiration to strengthen bilateral relations in various fields and discuss ways to increase the volume of The trade exchange between the two countries, and the mechanisms for promoting Egyptian investments in the Comoros, in light of the capabilities and vast experiences that Egyptian companies enjoy and a distinguished reputation at the Arab, African and international levels. And benefiting from the distinguished Egyptian expertise to support the development plans of the Comorian government. The Minister also praised the precautionary and preventive measures applied in the airports of the Arab Republic of Egypt.

For his part, the ambassador of the United Comoros State expressed his appreciation for the fruitful relations between the two countries in the air transport industry, praising the development achieved by the civil aviation sector during the current period, stressing his country’s aspiration for more cooperation as there have been extended relations with Egypt for many decades in many countries. In addition to continuing coordination and continuous consultation between the two countries.

The article, the Minister of Aviation discussing cooperation in the air transport sector with the Minister of Tourism of the United Republic of the Comoros, was written in Al Borsa newspaper.