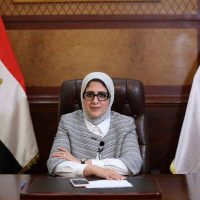 Zayed: Providing vaccinations for all medical teams in isolation, chest and fever hospitals … and the circular is underway for the rest of the hospitals

Dr. Hala Zayed, Minister of Health and Population, during a cabinet meeting today, reviewed efforts to confront the “Corona” virus, the position of providing vaccines, as well as the numbers of new cases of infection, the total number of infected Prime Time Zone so far, the number of cases that recovered, and the number of deaths.

The minister said: The weekly infection rate has witnessed a remarkable decline since the third week of last January, and the death rate also shows a decrease during approximately the same period.

The Minister of Health reviewed the position of providing vaccines for medical teams, explaining that the vaccine has been provided to all medical teams in each of the isolation, chest and fever hospitals, and that the vaccine is being circulated to the remaining 363 hospitals designated by the Ministry of Health, and 11 university hospitals have been supplied with the vaccine, as well as hospitals. Port Said Health Care Authority.

The minister explained that the Chinese government decided to donate 300,000 doses of the Chinese vaccine against the emerging “Corona” virus to Egypt. With the aim of supporting the Egyptian government’s efforts to confront the pandemic.

With regard to the health services provided to citizens, in parallel with the services provided to care for patients with the “Corona virus”, the Minister indicated that the total number of patients who required surgical intervention amounted to 215.6 thousand patients during the period from the beginning of March 2020 until January 31, in the specialties: Cerebral catheterization Peripheral catheterization, kidney transplantation, liver transplantation, cochlear implantation, brain and nerve surgery, cardiac catheterization, brain and nerves, open heart, bones, ophthalmia, and tumors, in addition to about 14 thousand patients who received drug treatment as an alternative to the surgical procedure, which represents About 33% of all cases since the elimination of waiting lists initiative was launched in July 2018.

The Minister indicated that 5 million women have been examined so far during the “Corona” pandemic, as part of the presidential program to support women’s health, as the initiative has been completed, despite the continuation of the pandemic and the accompanying challenges, due to the seriousness of the consequences of stopping the delay in discovering the disease and the deterioration of the disease condition of patients Which affects the cure rates.

The Minister also presented a comparison of the numbers of oncology patients during the period from 2018 to 2020, explaining that she notes a decrease in the mortality rate of oncology patients in the last six months of 2020, at a rate of 0.93% compared to 2019, and therefore the intense attention to continuing early detection initiatives continues and is in place to protect patients. Of complications and maintaining the rate of decline in the death rate.

With regard to training the nursing staff, the Egyptian Ministry of Health has trained 79,000 members of the authority in the curative care sector to confront the Corona virus. As for the follow-up of home isolation cases, periodic follow-up is done by basic care doctors, and in the event the patient wishes to request emergency services , He calls the call center 105, or sends a message to the number 1440 and writes the word (isolation).

She also referred to the emergency follow-up system for “Corona” patients in home isolation, through the website, where the case is contacted and medical instructions are given or transferred to a hospital if necessary, and the measures taken to help the patient appear on the site.

The article The Minister of Health: Corona injuries and deaths have decreased since the third week of January, it was written in the Al-Borsa newspaper