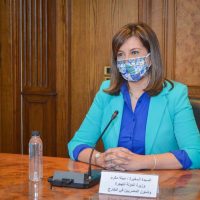 Ambassador Nabila Makram Abdel Shaheed, Minister of State for Immigration and Egyptians Abroad, discussed with a delegation from the British University ways of joint cooperation between the two sides to implement a number of initiatives implemented by the ministry.

Ambassador Nabila Makram stressed the importance of the university’s role as a distinguished educational edifice that contributed to producing generations with the necessary skills and knowledge that contributed to practical applications on a wide field in Egyptian society as a result of its commitment to quality education in accordance with international standards, as well as the university’s role towards social responsibility and its participation Continuing to support national projects and initiatives.

She congratulated Dr. Mohamed Lotfy, President of the British University, on his assumption of the presidency of the British University in Egypt, as he is one of the most prominent Egyptian scholars and experts abroad. He is also one of the most important professors of the internationalization of higher education. Especially for his active role in contributing to many projects in cooperation with the European Union to reform higher education as founder and member of the Board of Directors of the Arab-European Network.

Makram expressed her aspiration to benefit from the academic and research aspect of the British University and its role in society, in accordance with the directives of President Abdel Fattah El-Sisi, President of the Republic, to seek the assistance of academics and researchers, to support the implementation of the state’s plans towards real sustainable development.

The minister said that the meeting witnessed discussions on involving the university to support the implementation of a number of initiatives on which the Ministry of Immigration is based during the current period, including participation in the presidential initiative “A Dignified Life” to develop the Egyptian countryside, and the use of research methods to support the ministry’s efforts to combat illegal immigration within the presidential initiative. “The Lifeboats”, as well as supporting the implementation of the “Speak Arabic” initiative to preserve the Egyptian identity and teach the Arabic language, in addition to discussing the participation of university students in the activities of the Ministry of Immigration Center for Dialogue for young Prime Time Zone studying abroad.

For his part, Dr. Mohamed Lotfy, President of the British University, praised the ministry’s efforts in linking Egyptian experts and scholars abroad to their homeland, and to benefit from their expertise in the national projects on which the Egyptian state is based at the current stage, stressing the British University’s keenness to create fruitful cooperation with the Ministry of Immigration in a number of files. And making it available to all academic expertise and possible support within the framework of the university’s societal role, and its belief in the importance of partnership with the various sectors of the state, to achieve the maximum benefit that ensures community service, using research methods.

For her part, Dr. Farida Khamis, Chairman of the Board of Trustees of the British University, said that the university supports all national initiatives, believing in the importance of the role of institutions in adhering to the university’s societal duties in general. In order to continue the successes achieved by Egypt at various levels, she pointed to the importance of contributing to the industry of development and prosperity, with science, knowledge and distinguished scientific research.

The article, the Minister of Immigration discussing cooperation with the British University in implementing the ministry’s initiatives, was written in Al Borsa newspaper.