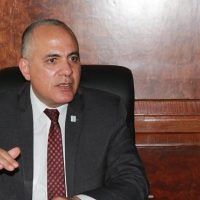 The Minister of Water Resources and Irrigation, Dr. Mohamed Abdel-Aty, announced the start of the implementation of the largest campaign to remove encroachments in the history of the Ministry of Water Resources and Irrigation, with the aim of restoring the watercourse of the Rashid branch to its natural state, which was affected as a result of the violations committed against it.

The Minister of Irrigation said that this comes in implementation of President Abdel Fattah El-Sisi’s mandate to remove all encroachments on the course of the Nile and its two branches within six months.

He added that an integrated plan was drawn up to remove more than 3,000 cases of encroachment on the Rasheed branch stream within 10 days.. Pointing out that 568 cases counted yesterday have already been removed, and the removal work is still in progress so far, as the infringements that were removed varied between the works of Backfilling, illegal buildings, fences and nests in the governorates of (Giza – Beheira – Qalyubia – Gharbia – Menoufia – Kafr El-Sheikh), explaining that the removal work is carried out in full coordination with the Ministry of the Interior and the concerned authorities, and the Ministry of Water Resources and Irrigation has provided the necessary equipment for removals.. indicating that the removals are being carried out. Execution of removals at the expense of violators.

Abdel-Aty added that coordination with the Ministry of Local Development is currently underway to remove large quantities of waste dumped near the bridges of Rashid branch in the Giza governorate and Tala Center in Menoufia.. He indicated that 700 cases of encroachment on the Damietta branch were monitored, and an integrated plan was developed to remove these infringements in the near future. Urgent.

He stressed that the ministry is determined to confront – with firmness – all forms of encroachment to deter everyone who is tempted to encroach on the Nile, and in a manner that leads to achieving the desired goal of reaching a “Nile without encroachment”, explaining that the Ministry of Irrigation agencies are working around the clock to confront these infringements. Whatever its size or perpetrator, with the aim of preserving the Nile River, ensuring good management and operation of the water system, and protecting state property.

The article, the Minister of Irrigation, announced the start of the largest campaign to remove infringements in the history of the ministry. It was written in Al Borsa newspaper.