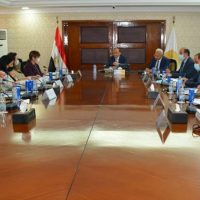 Major General Mahmoud Sharawy, Minister of Local Development, held a meeting with a number of representatives of United Nations organizations, international bodies and international partners in Egypt, to discuss the latest arrangements for the activities of the “International Cities Day” conference, which will be hosted by Luxor on October 30 and 31, under the auspices of President Abdel Fattah El-Sisi In the presence of a number of international officials, including ministers, governors and mayors from different countries of the world, it will be held under the title “Adaptation and Strengthening the Capabilities of Cities to Resist Climate Change”.

Major General Mahmoud Sharawy stressed the Egyptian government’s endeavor to enhance cooperation relations with various United Nations institutions and international partners, especially those working in the fields of sustainable development and training, pointing to the good coordination between the ministry with development partners in implementing some development projects and programs of interest to the Egyptian citizen in various fields. provinces.

The Minister of Local Development also pointed out the importance of the role played by the United Nations organizations and international partners in the success of the World Cities Day conference, given the great international capabilities and experiences it has in this field, and building on the pioneering successes achieved by the joint cooperation between the two sides during the last period.

The Minister of Local Development presented a number of themes and topics that will be discussed at the conference, which are related to climate change, in addition to some programs and projects implemented by the Egyptian state during the current period, on top of which are the Egyptian Rural Development Program “Dignified Life” and the Local Development Program in Upper Egypt in the governorates of Qena and Sohag, and some The successes achieved by the government in the field of developing and building cities and improving infrastructure, as well as discussing how to use this international event in order to draw the world’s attention to the major national initiatives undertaken by the Egyptian government in addition to development challenges with the participation of United Nations organizations.

Shaarawy also stressed the ministry’s endeavor to bring this conference out in a way that suits Egypt and coordinate with the rest of the ministries concerned with the government, especially in light of the ongoing preparations by the Ministries of Local Development and Tourism and Antiquities to complete the project to develop and revive Rams Road in preparation for its opening in a major celebration in Luxor, noting that the implementation of the project will be implemented. All necessary preventive and precautionary measures at the conference, in coordination with the Egyptian Ministry of Health.

He explained that this conference will include many cultural and archaeological events and activities on the sidelines of the conference, which reflect the Egyptian civilization in the Luxor Temple, in addition to their presence in Luxor, the International Open Museum, an opportunity to show Egypt’s ability to rehabilitate the archaeological infrastructure and review its efforts to preserve the monument in conjunction with growth. urban.

Major General Mahmoud Shaarawy stressed that the ministry seeks to enhance the capabilities of local cadres in the governorates through cooperation with international organizations and international partners in Egypt to implement state programs and projects, provide sustainable job opportunities for youth and women, and improve the most needy areas.

During the meeting, representatives of the United Nations and development partner organizations expressed their readiness to contribute to the success of this important conference and to provide all necessary support and technical expertise for this. development.

The article, the Minister of Local Development, discusses the arrangement of the activities of the “International Cities Day” in Luxor, which was written in Al Borsa newspaper.