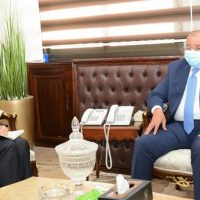 Major General Mahmoud Sharawy, Minister of Local Development, received Elena Panova, the United Nations Resident Coordinator in Egypt, to discuss aspects of future cooperation between the two sides. The meeting was attended by a number of United Nations leaders in Egypt and the ministry.

At the beginning of the meeting, Major General Mahmoud Shaarawy welcomed Elena Banova in her current interest in Egypt, expressing his wishes for her success. He also praised the historical relations between the Egyptian state and the United Nations over the past years.

The Minister of Local Development stressed the ministry’s aspiration to strengthen cooperation relations with the United Nations and all its affiliated organizations operating in Egypt to achieve the sustainable development goals adopted by the Egyptian government.

Major General Mahmoud Sharawy reviewed the most important features of the national project for the development of Egyptian villages, within the “Dignified Life” initiative launched by President Abdel Fattah El-Sisi and being implemented over the next three years.

He pointed out that this initiative started with the village development program of 208 villages, as well as the local development program in Upper Egypt, which is implemented by the government in coordination with the World Bank in the governorates of Sohag, Qena, Minya and Assiut, in addition to the first phase of the presidential initiative “Dignified Life” which was implemented in 375 rural communities. In the governorates, at a cost of 7 billion pounds, about 4.5 million citizens benefited, and 1,300 projects were implemented that provided more than 550,000 temporary and permanent job opportunities for villagers.

He explained that the Egyptian Rural Development Program is the project of the twenty-first century for a number of reasons, foremost of which is that it will be implemented on an unprecedented geographical scale of about (4600 villages) in 20 governorates, followed by about 30,000 rural communities in about 175 administrative centers in the governorates, stressing that there are no A country in the world is implementing a national project of this large size, where its investments exceed about 700 billion pounds over 3 years, to change the shape of the Egyptian countryside, raise the standard of living and improve the quality of life of about 58 million citizens of villages in various service and vital fields.

The Minister of Local Development added that the projects of the Egyptian Rural Development Program include its investments in all fields (infrastructure – community services facilities – social protection – economic development – improving government services and developing local administration – housing projects), as well as full participation of citizens and civil society in planning and follow-up Implementation and promising opportunities for the private sector and national companies in various fields.

The Minister also praised the support provided by the United Nations and its organizations in the programs and initiatives implemented and supervised by the Ministry in the various governorates of the Republic, in addition to the support of the United Nations in hosting Luxor City for the “World Cities Day” conference on October 30 and 31, which is held under the auspices of President Abdel Fattah El-Sisi under Title: “Adaptation and Strengthening the Capabilities of Cities to Resist Climate Change”.

Major General Mahmoud Shaarawy stressed the ministry’s endeavor to enhance the capabilities of local cadres in the governorates through cooperation with international organizations and international partners, in a way that contributes to implementing government programs and projects, providing sustainable job opportunities for youth and women, and improving the most needy areas.

For her part, Elena Panova stressed the importance of the pivotal and important role played by the Ministry of Local Development in coordinating with the governorates, noting its interest in cooperating with the Ministry to support local communities, especially in the most needy villages.

She expressed her aspiration to strengthen relations of cooperation with the Egyptian government, and praised Egypt’s recent successes in a number of areas of interest to citizens.

She also commended the United Nations Resident Coordinator in Egypt for the initiative of President Abdel Fattah El-Sisi to develop Egyptian rural villages.

Panova stressed the readiness of the United Nations to contribute with all its technical expertise to enhance this ambitious program in order to achieve the goals of the “Decent Life” initiative announced by President Sisi and the government to improve the lives of citizens.

She pointed out that this program is the largest in the world and will contribute to improving the quality of life indicators for rural citizens in many areas, especially services, education, health and providing job opportunities for women and youth.

She said that the Egyptian government is making great efforts in terms of developing infrastructure, utilities and services for citizens in all governorates, and empowering women and youth.

The Minister of Local Development stressed the government and the ministry’s interest in the file of economic empowerment of the Egyptian villagers, including youth and breadwinners, to improve the level of families’ income in the village, stable income and sustainable job opportunities. Work and raise the efficiency of some products that characterize some villages, such as black honey, talli, farka and some other products and some small and medium enterprises.

Shaarawy also referred during the meeting to the achievement of the Local Development Program in Upper Egypt in the governorates of Sohag and Qena, which is implemented by the government with the World Bank, after it was listed as one of the best practices that achieve the 2030 Sustainable Development Goals of the United Nations Department of Economic and Social Affairs.

At the end of the meeting, it was agreed to continue communication between the two sides to prepare terms for the partnership agreement between the ministry and the United Nations during the coming period to support the ministry’s initiatives and programs, especially the Egyptian rural development program.

The article, the Minister of Local Development, discusses with the United Nations Resident Coordinator cooperation in the “Decent Life” program, which was written in Al Borsa newspaper.