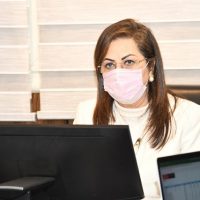 Dr. Hala Al-Saeed, Minister of Planning and Economic Development, agreed to allocate EGP 200 million to Assiut University Hospitals, in order to complete the construction of the Trauma and Emergency Center building, and to develop an existing building to establish a dialysis unit in university hospitals.

Dr. Hala Al-Saeed, Minister of Planning and Economic Development, stated – in a statement today – that the approved amount includes allocating 185 million pounds for the first project, which is concerned with completing the Trauma and Emergency Center, which is expected to open next January, in addition to 15 million pounds for the project to develop an existing building to establish a dialysis unit. in Assiut University Hospitals, noting that the total cost of the first project amounted to about 860 million pounds.

Al-Saeed stressed that the project to complete the Trauma and Emergency Center represents a qualitative leap in the field of emergency in the governorate in particular and in Upper Egypt in general, where Assiut University is distinguished by the presence of distinguished medical cadres, which makes its hospitals a center for those seeking treatment service in all Upper Egypt, and the project to establish the Trauma and Emergency Center building consists of the hospital Which includes 8 floors other than the ground floor and the basement with a capacity of 478 beds, other than the operating rooms and intensive care, the microscopic surgery building, the hospital service building, and the tunnel linking the Injury Hospital and other Assiut University hospital buildings.

Regarding the second project, which is a project to develop an existing building to establish a dialysis unit in Assiut University Hospitals, Al-Saeed explained that the unit comes with a capacity of 76 dialysis machines at a cost of 26 million pounds, noting that an amount of 15 million pounds was allocated to equip the unit with dialysis treatment units and the necessary equipment to start its operation in June. 2022.

The article the Minister of Planning approves 200 million pounds for the projects of Assiut University Hospitals was written in Al Borsa newspaper.