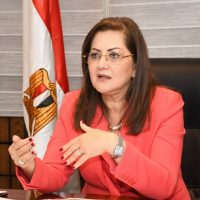 Dr. Hala Al-Saeed, Minister of Planning and Economic Development, affirmed the state’s continuous endeavor to raise the efficiency of public spending, pointing to the start of a wide range of public investments aimed at advancing economic growth.

This came during Al-Saeed’s meeting with members of the American Chamber of Commerce to discuss the launching of the 43rd session of the Egyptian Door Knocking Mission, scheduled to be held on October 4-8 in the American capital, Washington, with the participation of about 7 investors and businessmen, which is organized by the Chamber in cooperation with the Egyptian-American Business Council in Cairo.

Al-Saeed said that upward growth rates have been achieved in the past five years, as the growth rate reached 5.6% in the first half of the year 19/2020 before the outbreak of the Corona epidemic, and despite the crisis, the Egyptian economy achieved a growth rate of 3.6% during 19/2020.

During the meeting, Dr. Hala Al-Saeed reviewed the role of the Ministry of Planning in formulating the investment plan, noting the increase in public investments in the 21/2022 plan, especially for sectors that stimulate economic growth and provide decent job opportunities.

The Minister of Planning referred to the ministry’s role in developing and adopting an integrated system for preparing and monitoring the investment plan (ISIPPM), in addition to establishing a permanent joint committee that includes representatives from the ministries of planning and finance to develop and simplify internal investment procedures and identify potential joint projects.
She pointed to the doubling of public spending during the last five years and the implementation of a number of initiatives: including the initiative for a decent life, doubling the intensive care beds and ambulance points, reducing the number of students in classrooms, introducing technical education to excel in the labor market through the establishment of many schools and technological universities, and expanding In the establishment of industrial complexes and others.

She discussed the structural reforms program, which is the second phase of the National Economic and Social Reform Program, which targets bold and constructive structural reforms in order to encourage inclusive growth, create new job opportunities, diversify and develop production patterns, improve the business climate, and localize manufacturing, in addition to enhancing the competitiveness of exports. Egypt in order to achieve comprehensive and sustainable economic development, explaining that the program aims to change the structure of the economy by increasing the relative weight of three leading sectors: industry, agriculture, communications and information technology.

The Minister of Planning and Economic Development also indicated during the meeting that Egypt launched the Human Development Report 2021 in cooperation with the United Nations Development Program as one of the most important international reports that monitor the status of human development in the world, pointing out that Egypt is proud of being one of the first countries that was keen on documenting the state of human development. And that the report reflects the state’s ability and eagerness to produce and make data available. The report also deals in depth with all development issues and concerns; This makes him an accurate observer of the state of development in Egypt, with its challenges and achievements.

The article, the Minister of Planning, confirms the state’s continuous efforts to raise the efficiency of public spending. It was written in Al Borsa newspaper.