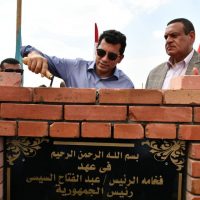 Al Sharma to “Al Borsa”: The club is spread over an area of ​​22 acres… and the usufruct system is implemented

Dr. Ashraf Sobhi, Minister of Youth and Sports, accompanied by Major General Hisham Amna, Governor of Beheira, laid the foundation stone for the establishment of several investment projects in Wadi El-Natrun Sports Club, at a cost of 600 million pounds.
Engineer Walid Al Sharma, head of the Wadi Office for Design and Engineering Consultations, the engineering consultant for the Wadi Al-Natrun Club project, said that the club is being built on an area of ​​22 acres, and is divided into a social part that includes a hotel on an acre area, and a multi-purpose building that includes a hall for celebrations and conferences, and two children’s play areas for those who are less From 6 years and older, shops, cinemas
He added to “Al-Boursa”, the sports part includes a swimming pool for children and another covered for women only, a main football field with an amphitheater with a capacity of 5,000 spectators, a subsidiary football field for training, 3 five-a-side football fields, two courts for basketball, volleyball and handball, and two playgrounds. Table tennis, two squash courts, and a track for athletics. He continued, that the implementation of the club will be carried out using the usufruct system, and it will be presented in stages, including what has already been done, and it will be announced during the coming period.
Dr. Ashraf Sobhi, Minister of Youth and Sports, pointed to the feasibility of investment offering projects using the usufruct system that the ministry pursues through the participation of the private sector to invest in clubs and youth centers at the level of all governorates, where these facilities are developed, and an appropriate return is provided to the authority on a monthly basis; To spend on maintenance work and implemented activities, based on a specified number of years within the framework of the laws and regulations regulating in this regard.
The minister explained that the many facilities that the club will include, and their diversity, will serve the Prime Time Zone of Wadi al-Natrun, and provide them with various youth and sports services, indicating that it will represent a strong addition to the sports facilities in Beheira Governorate.
The Minister of Youth and Sports, during his stay in the Buhaira Governorate, was keen to inspect the Khartoum Youth Center of the Badr Center, which underwent comprehensive development work, which included the construction and furnishing of an administrative building, a five-field stadium, and the erection of a fence surrounding the center at a total cost of 8 million and 150 thousand pounds, as part of a decent life initiative.

The article was written in Al Borsa newspaper, the Minister of Sports inaugurates investment projects in Wadi El Natroun Club at a cost of 600 million pounds.