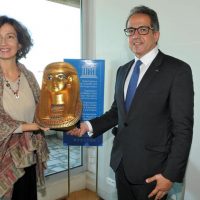 Khaled Al-Anani, Minister of Tourism and Antiquities, met with Audrey Azoulay, Director-General of UNESCO, over lunch at the organization’s headquarters, to discuss many topics related to heritage and civilization, and ways of cooperation during the coming period.

The Director-General of the organization was keen to congratulate the minister for the lecture, which the attendees praised, and which reflects the state’s efforts in the field of antiquities.

During the meeting, the latest developments in the projects implemented in cooperation with UNESCO in the field of antiquities and heritage preservation were discussed and reviewed.

At the end of the meeting, Dr. Khaled Al-Anani presented Mrs. Azoulay with a copy of Yuya’s mask preserved in the Egyptian Museum in Tahrir, which she visited with the minister last April on the sidelines of her participation in the royal mummies procession.

The minister also invited her to attend the celebration that will be held in Luxor during the coming period.

The article, the Minister of Tourism, discusses with UNESCO ways of cooperation during the coming period, was written in Al Borsa newspaper.