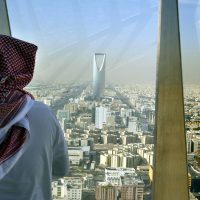 The International Monetary Fund expected real GDP growth in Saudi Arabia by 2.1% in the current year and 4.8% in the next year, compared to a previous estimate of the fund at 4%, according to Al-Arabiya.

The IMF stated that real GDP will shrink 0.5% in 2021 in light of the levels of oil production agreed upon in the framework of OPEC +.

The fiscal deficit is expected to drop to 4.2% of GDP this year, which is slightly lower than expected in the budget.

Last month, the International Monetary Fund, in its World Economic Outlook, raised its estimate for the growth of the Saudi economy by 2.9% in 2020, instead of 2.6% in its previous forecast during January 2021, while maintaining its estimates for 2022 at 4%.

According to the Fund, the global outlook is still surrounded by a great deal of uncertainty a year after the start of the pandemic. Of concern is the emergence of new mutated virus strains and the accumulation of human losses as a result of the pandemic, at a time when vaccination coverage increases and sends a sense of optimism.

The article “The Monetary Fund” raises estimates of the growth of the “Saudi economy” to 4.8% during 2022 was written in the newspaper Al-Borsa.