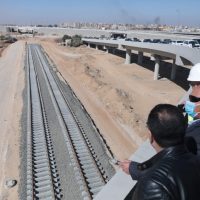 The Minister: The project links the Greater Cairo region with the new urban cities

The Ministry of Transport intends to operate the first phase of the Monorail project, the Administrative Capital, at the end of May 2022.

The minister said that the Monorail sector of the Administrative Capital is being implemented in two phases in parallel. The first phase extends from the workshop site in the New Administrative Capital to the Al-Moshir Mosque station, with a length of about 45 km and it is planned to open at the end of May 2022, and the second phase extends from the Al-Moshir Mosque station to the stadium station in length. About 11.5 km, it is scheduled to open in February 2023.

He reviewed the Adly Mansour Central Interchange Station, which will include an integrated transportation complex and a commercial investment area on an area of ​​15 acres, in order to exchange services between five different means of transport, including a third line metro station (opened and operated), a LRT electric train station and a railway station «Cairo / Suez. »And a station for the superjet and the shuttle bus (Adly Mansour / Al-Salam). The Minister directed coordination with the General Directorate of Traffic to ensure the flow of traffic movement in all streets surrounding the station.

After that, the minister went to inspect the railway installations at the project bridge, which include (basalt – flanges – rails). The railway works were completed in a number of sectors, and he also monitored the finishes of the stations and bridges. The project includes 4 car bridges, the final finishing works of which are being carried out, namely, the bridges of the hextep and the future 1 Future 2 and Sunrise.

The project includes 7 bridges for the LRT track. Final finishes are being implemented for four of them, which are the bridges of Ismailia, Suez, Geneva and Rubiki 2, and the implementation of the bridges of Rubiki 1, the capital 1 and the capital 2, which are in their final stages, and the project includes 3 tunnels, which are a car tunnel at the Capital Gardens and two LRT tunnels, which are: New Heliopolis and Badr, and the three tunnels were completed.
The minister said that the overall implementation rate of the construction works for the first and second phases (civil – finishing) amounted to 79%.

The minister also followed up on the implementation work of the third phase of the project, which includes stations: (Administrative Capital 3 – Strategic Command – Sports City – Central Interchange Station with the express electric train).

The LRT electric train starts from Adly Mansour station and then runs parallel to the (Cairo-Ismailia) desert road to Badr City, then branches north after that to the 10th of Ramadan City and south to the New Administrative Capital, extending to the International Sports City with a length of 92 km and a number of 16 stations.

The article The opening of the first phase of the “Monorail Administrative Capital” project in May 2022 was written in Al-Borsa newspaper.

Eccentrics cost the UAE millions of dollars to demonize Qatar, and what was hidden was the greatest blow to it in 45 minutes (video)...