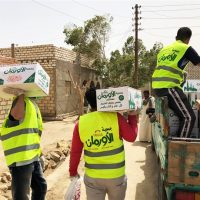 The Orman Association aims to distribute between 350 and 400 thousand food cartons during the month of Ramadan in cooperation with 7885 small associations in all governorates.

Major General said Mamdouh Shaaban General Director of the Orman Association for the “Stock Exchange”, Orman is a charitable association based on donations from Egyptians inside and outside the country.

He added that the association continues its efforts, which began 25 years ago, to distribute cartons of foodstuffs to the most needy groups during the month of Ramadan.

It is planned to distribute between 350 and 400 thousand cartons, including thousands of tons of foodstuffs, throughout the blessed month.

He pointed out that the association will distribute these cartons to families in cooperation with 7885 small associations in 27 governorates, through the offices of the Orman Association in the Republic.

Shaaban explained that one carton suffices for the family from approximately 18-21 days, and it contains all the food requirements of sugar, rice, pasta, ghee, sauce, lentils, beans, dates, tea and others.

He pointed out that the association will not limit its efforts during the month of Ramadan to distributing food cartons only, but also to complete its assistance, which is the preparation of orphans, heart and eye operations, and the delivery of prosthetic devices and medical stethoscopes.

Shaaban said that donations to the Orman Association did not decrease due to the outbreak of the Coronavirus … rather the opposite happened, which is the increase in donations during the epidemic period and in this season in particular.

He pointed out that the association has many partners in its initiatives with various bodies and institutions, including the National Bank, Banque Misr, Banque du Caire, Iron and Steel Company, oil companies and a number of factories.

Cooperation is also underway with many real estate development companies that play a major role in supporting civil society to provide for the needs of the poorest family in various governorates.

He added that the association is also participating in the presidential initiative “A Decent Life”, in cooperation with the Ministry of Social Solidarity, by carrying out works to rehabilitate homes, supply water connections, and all family supplies in areas of greatest need.

The Orman Association works according to an accurate database that includes 795 thousand families, which are expected to exceed one million families during the coming period.

Shaaban emphasized that “Orman” took into consideration the precautionary and preventive measures recommended by the World Health Organization and the Egyptian Ministry of Health to prevent the spread of the virus.

He said that the association appreciates the role of the private sector, based on its societal responsibility in supporting the efforts of the state and the role of civil society institutions.

The article “Orman Association” distributes 400 thousand Ramadan cartons in the governorates. It was written in Al-Borsa newspaper.