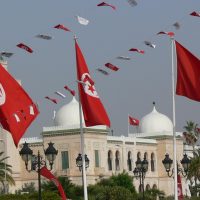 Tunisian government bonds came under fresh pressure on Tuesday, with the cost of insuring against default risk hitting a record, as concerns about the country’s political crisis continued to rise, Reuters reported.

Tradeweb data showed that the 2024 bond, which is officially issued by the country’s central bank, fell by about a cent on Tuesday to trade at 83,535 euro cents.

Data from IHS Markit also showed that five-year credit default swaps jumped to 840 basis points, up 22 basis points from Monday’s close and more than double their levels at the start of the year.

The article was written in Al Borsa newspaper, the political crisis in “Tunisia” casting a shadow over the bond market.