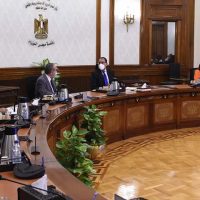 Prime Minister Mostafa Madbouly said that the government is working to develop work in the civil aviation sector, which leads to achieving the required excellence in its performance, because of its important role as one of the tributaries of the national economy.

He added that the state supports future plans and proposed studies that will raise the level of performance of this sector, and the companies affiliated with the ministry, within the framework of the state’s efforts for administrative reform in various ministries.

Yesterday evening, the Prime Minister held a meeting with Pilot Mohamed Manar Enaba, Minister of Civil Aviation; To review the latest developments in the restructuring of the civil aviation sector, and the future vision for the status of the holding company for “EgyptAir”.

The Minister of Civil Aviation reviewed the developments related to the restructuring of the civil aviation sector, noting in this regard that the Central Agency for Organization and Administration has implemented procedures to modernize the administrative structure of the Ministry, which will contribute to raising the level of performance and improving the quality of services provided in various aviation activities, and at the same time helps in Achieving the desired goals, vision and strategic plan of the Ministry.

He also stressed that the restructuring of the Ministry of Civil Aviation would achieve a set of goals for the civil aviation sector, the most prominent of which is raising the efficiency of workers, through training and qualification and raising the level of services provided to citizens through various mechanisms that allow the Ministry of Aviation to work more effectively and efficiently.

The Minister touched on what has been implemented regarding the holding company for EgyptAir, pointing out that the companies affiliated with EgyptAir are currently being restructured, and the Minister also reviewed the Ministry of Aviation’s plan and future vision to develop performance during the coming period.

The Prime Minister’s article: A plan to restructure the civil aviation sector and “EgyptAir” was written in Al Borsa newspaper.