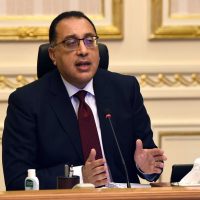 Dr. Mustafa Madbouly, Prime Minister, held a meeting this evening; To work on dissolving governmental entanglements regarding leased assets between the various parties

The Prime Minister indicated that there is a directive from President Abdel Fattah Al-Sisi, President of the Republic, to break the entanglements between government agencies related to leased assets, and to work to resolve any dispute between them.

During the meeting, Dr. Muhammad Mukhtar Jumaa, Minister of Endowments, put forward a number of proposals to resolve disputes and resolve clashes between government agencies related to leased assets. Whether it is related to the exploited or untapped assets.

He indicated that he had coordinated with the Minister of Justice in this regard; To form committees to settle disputes between government agencies without resorting to litigation, demanding that these proposals be presented to the Council of Ministers for a general decision in their regard.

He instructed the Prime Minister to quickly prepare a public memorandum to be presented to the Cabinet, and not to resort to litigation between government agencies.

For his part, Dr. Amr Talaat, Minister of Communications and Information Technology, presented the objectives of the digital system for the governance and management of state assets and properties, and the executive position of the system.

The minister emphasized that the system aims to regulate rental returns, limit encroachments on state assets, and improve collection capacity.

He pointed out that the total number of leased assets in the system amounts to about 1,087 million assets.

The Minister of Communications also noted that the system is based on several axes, including those related to infrastructure and networking, and within this framework the work environment was prepared and prepared from devices, storage units, and security devices for the final operation of the system.

A room was also equipped to operate the system with 20 devices; This is to test the quality of applications on the actual operating environment.

Dr. Amr Talaat mentioned that there is another axis related to applications and their testing, which is partly related to artificial intelligence and integration with the “Digital Egypt” platform, and another part to infringements and violations, debts, collection, evaluation and pricing, in addition to another part related to asset and contract data.

At the same time, the Minister touched on the content, data and integration axis, through which work has been done to integrate with both the state database and the “digital Egypt” portal, as well as integration with electronic points of sale to collect asset revenues.

The minister also presented the axis of operation and publishing, which includes the start of trial operation with a number of administrative bodies in the ministries and governorates, as well as some governmental bodies and banks, bearing in mind that work will be made to provide all the necessary equipment for this, reviewing the timeline for this system in which to use With artificial intelligence techniques.

The article The Prime Minister: A proposal to resolve governmental entanglements over leased assets without resorting to litigation was written in the Al-Borsa newspaper.