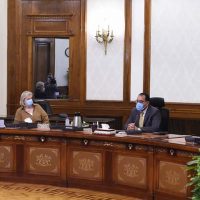 The article by the Prime Minister appreciates the close cooperation relations between Egypt and the Netherlands in many fields. It was written in Al Borsa newspaper.