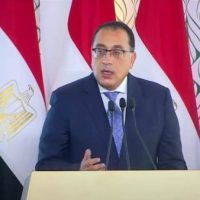 Prime Minister Mostafa Madbouly said that the volume of investments that have been implemented in recent years and which the state is still implementing in the Sinai Peninsula and the Suez Canal region will exceed 700 billion pounds when all these projects are completed.

The Prime Minister added, during the inauguration of the Bahr al-Baqar water treatment plant by President Abdel Fattah al-Sisi, that describing this project as the largest in the world stems from being a source of pride for all of us. Because it was implemented by the hands and arms of Egyptian engineers and workers under the leadership and supervision of the qualified men of the Engineering Authority of the Armed Forces.

He explained that the production capacity of the Bahr Al-Baqar Bank treatment plant will reach 5.6 million cubic meters per day, contributing to the addition of an area of ​​more than 400,000 acres that will be cultivable with the water of this giant plant.

The Prime Minister reviewed some examples of projects being implemented in Sinai, which fall within 5 main axes; Pointing out that the first axis was concerned with extending development bridges to Sinai, as it was isolated in many periods from the rest of the Republic, and the focus was on linking Sinai with the rest of the Republic, with the development of infrastructure and basic services in order to prepare the ground for any development projects that will be implemented on it, and then the goal was Next is to start with a set of investments; Whether agriculture or industry, or in any of the other economic fields, along with the tourism development that was already in place, as the focus in the development of Sinai was on tourism, especially in its south.

He pointed out that in order to complete the Sinai development vision, we had another goal, which was to establish new urban communities; With the aim of absorbing our Prime Time Zone in Sinai first, as well as to absorb the Egyptian youth who are keen to find job opportunities in the future.

The prime minister said that the projects of the road and tunnel network in Sinai included the implementation of 63 projects with lengths of up to 3,440 km.

With regard to the projects implemented in the ports and airports sector, Madbouly added that the Egyptian state has been interested in establishing and developing a number of ports and airports, including the establishment of the Bardawil International Airport, which was inaugurated to serve development projects that are being established in North and Central Sinai, in addition to developing the already existing airports. The development of St. Catherine Airport has recently begun, and it is scheduled to be operational next year.

He explained that the port development projects also included the development of the Nuweiba sea port, in addition to the various land and sea ports located in the Sinai, and in the east and west of the Suez Canal, including Badr Dry Port in Adabiya, and East Port Said Port, whose cost exceeds 40 billion pounds, as well as the port of Taba land.

The prime minister said that the state has implemented and is still implementing electricity projects for the Suez Canal and Sinai axis, with investments exceeding 76 billion pounds.

He pointed out that there are a large number of projects whose implementation will provide many job opportunities and achieve a qualitative addition to the Egyptian economy, including the industrial zone located around the port of Sokhna, which will have logistic and service areas, and the industrial zone in East Port Said on an area of ​​63 million square meters.