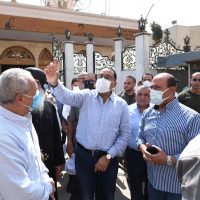 Restoring temples and reviving Pharaonic monuments in Luxor will make it an open museum that attracts the attention of tourists from all over the world.

Dr. Mostafa Madbouly stressed that the state, with all its agencies, provides all the capabilities necessary to hold a major celebration to promote Luxor Governorate under the title: “Luxor in its new dress,” on the sidelines of the completion of the project to revive the road of the grand processions known as “The Way of the Rams”, stressing that President Abdel-Fattah Al-Sisi, the President of the Republic, is closely following the preparations that are in full swing to hold this celebration to match the festivity of the Pharaonic mummies procession that dazzled the whole world.

The prime minister said that the large projects that the state is currently implementing in a number of archaeological areas in Luxor, which include the restoration of temples and the revival of Pharaonic monuments, will make this city an open museum that attracts the attention of tourists from all over the world.

The Prime Minister began the visit by inspecting the excavations started by the Ministry of Tourism and Antiquities, at the bottom of the palace of Tawfiq Pasha Andraos, adjacent to the Luxor Temple, which was demolished. Among them are Roman bronze coins, omens of a Roman-era wall visible on the ground, a side of an old storeroom, and a number of other archaeological icons of some historical eras, pointing to the continuation of excavations at this distinguished archaeological site.

Madbouly and his companions also inspected the excavations under a part of the Church of the Virgin Mary, which was removed, where Dr. Mustafa Waziri presented the results of those excavations, noting that 3 distinct rams were excavated, including one of the most magnificent statues of rams found in this site.

Major General Ahmed Fahmy, Director of Major Projects Department at the Engineering Authority of the Armed Forces, explained the executive position of the alternative facilities for the Church of the Virgin Mary, explaining that the implementation of the alternative administrative building for the Church of the Virgin had been completed in full, with the completion of the work of connecting facilities on public networks, and the transfer of special tasks had been completed. The church was transferred to the alternative church building, and the building was handed over administratively to church officials.

Prime Minister Dr. Mostafa Madbouly and his accompanying delegation also inspected the Karnak Temple, where he listened to an explanation from Dr. Khaled al-Anani, Minister of Tourism and Antiquities about the development work in the temple, where he explained that the Karnak Temples Visitors Center had been comprehensively developed, in terms of renewing paints, lighting and restoring carpets. Karnak temples, with the development of the outer courtyard of Karnak temples in terms of renovating and replacing floors, providing them with appropriate lighting, painting fences, and planting palm trees in some selected sites.

Madbouly also witnessed the restoration work of a ram’s head that was discovered by the rams road, as well as the restoration of a number of columns in the Karnak Temple. Once thousands of years ago, he was also acquainted with one of the most beautiful statues that was found from the most valuable materials, where Dr. Mustafa Waziri confirmed that a study is being carried out to assemble this statue.

Al-Anani: The completion of the first phase of the project to restore the Great Hall of the Legends in the Karnak Temples and restore its splendor by showing the original colors

In the Karnak Temple, Dr. Khaled Al-Anani added that the first phase of the project to restore the Great Hall of the Saints in the Karnak temples has been completed. It was by showing the original colors of the inscriptions of these masters in a wonderful way that impressed the visitors of the temple, noting that the work of the second phase of restoring the statues of rams in the first courtyard in Karnak is nearing completion, as 19 statues of rams in the northern side of the courtyard were restored and strengthened. A strong modern mastaba was built in place of the old dilapidated plinth, and the restored statues are currently being returned to their original location, and this project is expected to be completed within a few days.

Al-Anani indicated that the restoration team of the Supreme Council of Antiquities is also restoring the largest known statue of King Tuthmosis II in front of the eighth edifice in the Karnak temples. The restoration work will be completed before the end of October, pointing out that the Karnak temples had witnessed the largest project to provide access to Prime Time Zone with special needs in 2018, making the temple fully available for visits.

The Prime Minister and his escorts walked on the Rams Road, where he listened to an explanation from Dr. Khaled Al-Anani, Minister of Tourism and Antiquities, who explained that the project to discover and prepare the path of the Rams Road in Luxor is one of the most important archaeological projects undertaken by the state in order to transform Luxor into the largest open museum in the world. By linking the temples of Karnak, Luxor Temple, Mut Temple and the ruins of ancient Thebes, which are being discovered in the Nagaa Abu Asba area, with the Great Processions Road, for a distance of about 2,700 meters.

Dr. Khaled Al-Anani, Minister of Tourism and Antiquities, confirmed that the project to revive the Grand Processions Road is one of the largest archaeological projects that the state pays great attention to. The road work team discovered and restored the various parts of the road, and the road was developed and provided with the services necessary for its opening.

The Minister of Tourism and Antiquities confirmed that the excavations, archaeological discoveries, restoration and maintenance will continue in a large and expanded way after the official opening of the road, which represents a great addition and enrichment to one of the largest archaeological sites in Egypt, which extends for a distance of about 2,700 meters, noting that it is expected that the excavation works will be removed. Through the unveiling of everything related to the ancient city of Thebes through the ages by revealing the cultural, social, economic and religious activities, which represent a great civilizational reference.

The Prime Minister’s article: Holding a celebration to promote “Luxor” on the sidelines of the completion of the revival of “The Way of the Rams” was written in Al Borsa newspaper.