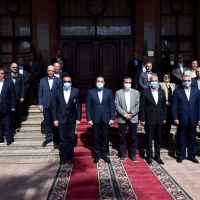 Dr. Mustafa Madbouly, Prime Minister, said that the state is currently making a great effort to develop the health system at the level of the Republic, in accordance with the directives of the President of the Republic, which aim to raise the level of medical services provided to citizens in all governorates.

The Prime Minister and his companions visited the development work of Shebin Al-Kom Teaching Hospital, as well as a project to construct a new reception and emergency building, as part of his tour, today, in Menoufia Governorate.

Madbouly toured the new emergency and surgeries building of the Shebin Al-Kom Teaching Hospital, where he listened to a presentation from Dr. Hala Zayed, Minister of Health and Population, about the construction works that took place in the new building for emergencies and surgeries, which is located on an area of ​​about 4770 square meters. It consists of 8 floors, including a CT and MRI department, and an interventional catheter, as well as 8 operating rooms, 48 ​​intensive care beds, 6 isolation care rooms, 96 internal beds, and 4 emergency dialysis machines.

The Minister of Health also made a presentation on the components of the “Shebin El-Kom Teaching Hospital”, which is located on an area of ​​52 thousand square meters, and 5 buildings are attached to it, other than the emergency and surgeries building, and the number of beds is 530 beds, in addition to 42 intensive care beds.

She explained that the hospital provides treatment services in various specialties, most notably cardiac surgeries, catheters, general surgeries, vascular surgery, orthopedics, gynecology and obstetrics, brain and neurosurgery, as well as specialties of dermatology, ear, nose and throat, premature births, intensive care for children and the digestive system And liver, oral and dental surgery, plastic surgery, burns, and dialysis, as well as psychiatric, neurological, and speech specialties.

The Minister also noted, during the presentation of the presentation, that the service departments include regular, CT, ultrasound, laboratories, and endoscopes, as well as physical therapy, a family planning unit, a premarital examinations unit, a hepatitis virus treatment unit, and a pharmacy, and it has been confirmed. Shebin El-Kom Teaching Hospital seeks to become a medical center of excellence at the regional and local level, especially as it is one of the largest and oldest hospitals in Menoufia Governorate, as it provides health care services to citizens of the governorate and other neighboring governorates. Meanwhile, the Minister of Health indicated that the building houses 400 doctors, between a consultant and a doctor.

At the conclusion of his visit to the hospital, the Prime Minister praised the development work carried out for the emergency building, directing the speedy completion of all equipment; Seeking to operate this building to serve the citizens.

The article The Prime Minister: Directives from the President to raise the level of medical services provided to citizens in the governorates were written in the Al-Borsa newspaper.