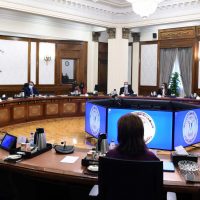 Dr. Mustafa Madbouly, Prime Minister, said that the state aims to increase the volume of government investments during the budget for the new fiscal year 2021-2022, to implement many national service and development projects that were assigned to President Abdel Fattah El-Sisi, President of the Republic, among which is the Village Development Project. Egyptian.

The Prime Minister held a meeting to review the investments allocated to the implementation of the national project for the development of Egyptian villages, within the framework of the presidential initiative “A Decent Life”, in the presence of Dr. Hala Al-Saeed, Minister of Planning, Dr. Jamil Helmy, Assistant Minister of Planning for Follow-up Affairs, and Mohamed Farid, Assistant Minister of Planning for Projects Al-Watania, and Ismail Youssef, head of the human development sector at the ministry, and Dr. Heba Mugheib, head of the regional planning sector, at the ministry.

The Minister of Planning and Economic Development presented the most basic features of the investments allocated to the implementation of the projects of the “Decent Life” initiative, in light of the fiscal year 2021-2022 plan, and the distribution of these investments among the various assigning bodies.

She indicated that these allocations are directed to complete the implementation of the ongoing projects, in addition to entering into new projects.

She said that with regard to the health sector, it is intended to complete the construction and equipping of a number of hospitals, as well as the implementation of new hospitals and basic care units, in the various cities and villages targeted within the framework of the National Project for the Development of Egyptian Villages.

She added that the projects of the Ministry of Youth and Sports include establishing, developing and equipping youth centers and five-a-side playgrounds, in addition to implementing modern irrigation projects in the villages of “Karima”, completing the rehabilitation and lining of canals, and entering into new projects in this regard, in addition to implementing projects for paving roads linking villages. In the centers and governorates, which contributes to facilitating movement between them.

She explained that the projects that will be implemented during the fiscal year 2021-2022 in the drinking water and sanitation sector include completing the implementation of about 266 ongoing projects in this sector, in addition to connecting the terrestrial communication network to the target villages.

The article The Prime Minister: Increasing government investments in the next fiscal year to implement national projects was written in Al-Borsa newspaper.

Eccentrics cost the UAE millions of dollars to demonize Qatar, and what was hidden was the greatest blow to it in 45 minutes (video)...